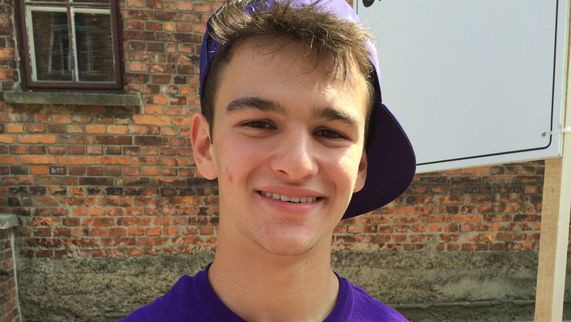 On May 1, 25 Cincinnati high schoolers left the U.S. for a transformative trip to Poland and Israel. One of those 2016 Cincinnati delegation participants was Eli Zawatsky. Eli and the rest of the Cincinnati delegation joined over 10,000 teens from around the world to participate in the “March of the Living,” an annual education program that examines the Holocaust, roots of prejudice, intolerance, and culminates in celebrating Jewish survival by visiting the state of Israel. The trip takes Jewish high school seniors on an exploration ‘from darkness to light’ starting on Yom HaShoah (Holocaust Remembrance Day) with a silent walk from Auschwitz to Birkenau to honor those who perished and to say in one voice, “We’re still here.”

After spending a week in Poland touring concentration camps and sites of Jewish life and culture, the Cincinnati delegation traveled to Israel where they observed Yom HaZikaron (Israel's Remembrance Day) and celebrated Yom HaAtzmaut  (Israel's Independence Day). They visited Cincinnati’s sister city, Netanya, and some of the most holy and iconic sites in Jerusalem. They climbed Masada; floated in the Dead Sea; toured in the desert and shopped in ancient marketplaces.

For months leading up to their May 1 departure, Eli and 24 others attended preparatory learning sessions led by Sarah Weiss, Executive Director of the Center for Holocaust and Humanity Education. Through personal meetings with survivors, lessons on the history of anti-Semitism and background on Israel, students were introduced to concepts they would be facing head-on during their trip.

“During our pre-trip meetings, we’ve gone through some of the personal stories of survivors in Cincinnati. Understanding that each one of those 6 million people had their own story, it’s so overwhelming. I hope to be able to absorb as many of those details and stories as possible,” Eli said prior to his trip.

Leading up to the trip, Eli had already established his goals and expectations. He knew that he was going to be faced with an emotionally charged journey, and he attempted to prepare himself for what he’d experience.

“I’m really looking forward to the emotional impact of the trip: to being in such a tremendous and emotion-filled place. I’m also looking forward to connecting more deeply with my Jewish heritage as a whole,” Eli said. “The Holocaust is so difficult to understand in depth, without firsthand experience. Even people who have been learning about it their whole lives will go to Poland and the camps and come back with their understanding flipped on its head.”

On May 5, the “March of the Living” procession was live streamed online, all over the world. But the televised portion of the March could not transmit the relationships created amongst students: the camaraderie and knowledge gained. The March was a mix of emotion: honor, grief and sympathy. And joy that the Nazi’s did not succeed in their mission.

“I’d say my relationship to Judaism has switched from community to a sense of identity. I now associate with it. Having been to Poland and Israel, it created a connection not just through Cincinnati, but to the entire global community,” Eli said.

The stories that Eli learned, and the experiences he shared with others during the “March of the Living” most definitely shaped him. “It minimized all of the issues I have in my everyday life,” he says. “It’s easier to face my problems and other people’s problems. The trip was a step back, and I now look at everything with a broader perspective.”