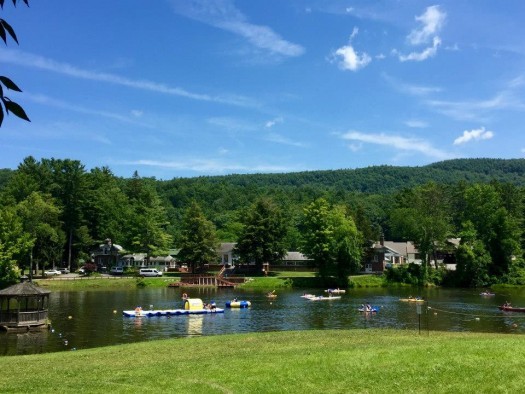 Ask children why they love camp and they will likely tell you that they love the fun activities, making new friends, or singing their cabin cheer really loudly in the dining hall.

Ask Jewish philanthropists why they love summer camp and they will probably mention a proven track record of strengthening Jewish identity and ensuring Jewish continuity.

Ask parents why they love summer camp…“It gets my kids out of the house for a month!” Regardless of the different perspectives of various stakeholders, one thing about which everybody agrees:

But what it is about summer camp that is so powerful? Yes, summer camp is filled with fun activities through which children make new friends. Yes, Jewish summer camp is a fully immersive educational experience where children learn to love their heritage. And yes, singing camp songs around a bonfire with your arms around your friends’ shoulders under the starry night sky gives you a warm fuzzy feeling inside that you just want to take home and share with the whole world. But what is really going on? Why is camp so much more impactful in the lives of young people than most of the other activities in which they partake?

The answer is that camp effectively harnesses what anthropologists call “liminality,” the state of being in transition, the middle stage between one place and the next. While mainstream society mostly marginalizes and even suppresses liminality, pressuring us to “figure it out” and to decide who we are and what we stand for as quickly as possible, summer camp embraces and celebrates the in-between state, encouraging young people to openly explore themselves and the world around them.

With a well-trained staff, a culture of positive encouragement, suitable facilities, thoughtful programs, and an abundance of spirited communal singing, Camp affects magical transformations in children by channeling the potential of liminal time, liminal space, and most importantly, liminal people toward self-realization and a community-centered orientation.

Time of the Season

“There ain’t no cure for the summer time blues,” proclaims the popular song by Eddie Cochran. Outside of camp, the liminality of summer can be overwhelming and, at times, downright depressing. Out of one grade but not into the next, removed from their normal school-year routine, children are prone to float in the vast amorphous ether of unstructured summer time, in constant danger of succumbing to the “summer time blues” and losing their sense of purpose.

Camp creates a whole new reality for young people, an alternate version of their lives that only exists between the months of June and August. In this space, everybody is between one grade and the next; everybody is in transition. This time, when children briefly lose their regularly assigned societal identity, is the perfect occasion for personal and communal transformation. Long days are transformed from slow moving drags into epic adventures as young people are transformed from wandering individuals into a cooperative community. Overflowing with creative activities and opportunities to build social bonds, one day at camp can feel like a week!

Camp exists at the borderline between urban and rural, not quite wilderness and not quite civilization. In this unique liminal environment, young people have the opportunity to safely explore the world around them and build a relationship with nature. Whereas at home, roads and routines dictate where and when children can venture, camp gives children the freedom to forge their own paths through mostly pristine wilderness.

As they wander through this liminal environment, young people walk with others who are also wandering. From distinct individuals moving through liminal space, they shift toward unity as they find common paths through the unknown together.

Along with time and space, age is the third key liminal attribute shared by summer camp attendees. Counting staff and campers, the vast majority of young people who comprise the overnight summer camp population fall between the ages of 10 and 21. These years mark the transition from childhood to adulthood and for many, can be an incredibly difficult and confusing time in which they are constantly challenged to figure out who they are.

Rather than eschew and marginalize pre-teens, teenagers, and young adults, summer camps encourage these liminal people to become leaders in their communities. Directors and senior staff present an idealized mode of being in the world and guide young people to model this ethical behavior for others. As they embrace their status as role models, campers, teenage counselors-in-training (CITs), and counselors grow as individuals while the communal bonds between them continue to strengthen.

A Recipe for Success

Summer camps have a unique advantage over most other community-building efforts: Liminality is their first ingredient. While synagogues, schools, and after-school enrichment programs often attempt to introduce camp-like activities into their curriculum, their success is hindered by the distinct lack of liminality children experience during the highly structured school year.

Ironically, it is precisely the challenges that mainstream society struggles to deal with—children and teenagers in the summer time – that summer camps embrace and channel toward the realization of their primary goals: personal and communal transformation.

Benjamin Kramarz is a New York based Jewish educator, musician, researcher, and writer.