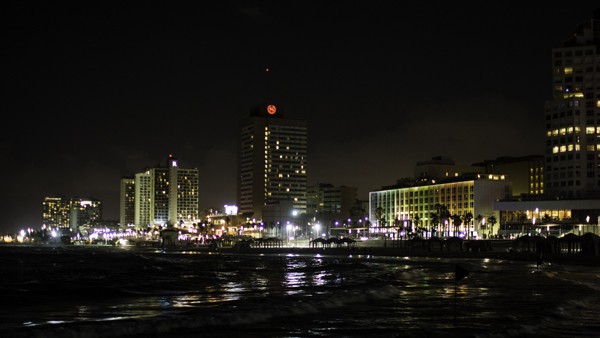 Prior to my trip in June, I had already been to Israel twice. The first time, I went with my grandmother to celebrate my Bar Mitzvah. It was a truly special experience, to see firsthand all of the things you only hear about in Sunday school. The second time was in 2009. I used a Cincy Journeys high school travel grant to go on a Young Judea trip, and I got to experience the country even more.

Those experiences were incredibly special to me, so there was no question about what I wanted to do with my summer off after graduating from college. I wanted very badly to go back.  The thing is, a lot about me had changed since the last time I had been; I was no longer a 16-year kid with no idea what he wanted to do with his life. I was (and still am) a newly-minted software engineer with a completely different view and understanding of the world. I had since picked up photography as a serious hobby and was itching for a good excuse to do it full-time for a while. I had already done all of the typical first-timer touring around the country, but I had never really had the opportunity to live like an Israeli.

Cincy Journeys, the program run by the Jewish Federation of Cincinnati that administers Israel travel grants funded by The Jewish Foundation of Cincinnati, connected me with a program that could not have been more perfect for my needs: Israel By Design. I was able to design my experience to cater perfectly to my needs and interests. I knew that I would be spending most of my life as a software engineer, so why not try living as a photographer in the meantime? Through the program, I set up a month-long internship with a company called My Israel Photos out of the Florentine neighborhood in Tel Aviv.

The burning question I had from my first two trips to Israel boiled down to a misunderstanding of Israeli culture. All of the religious aspects of the country are certainly awe-inspiring and touch a deep chord with my Jewish heritage, but why would anybody live in Israel? After all, isn’t it just a big desert land with scattered holy sites from various world religions?

Boy was I set straight in a hurry! Within 48 hours of arriving at Ben Gurion Airport, it became abundantly obvious why the country is so appealing to the people that live there.

The very first thing I got to photograph was the Tel Aviv pride parade. Now, given the stereotypes associated with Middle-Eastern countries, many people would be surprised to hear that there is even a gay pride parade in the first place. What struck me was the sheer amount of joy in everyone I saw that day. 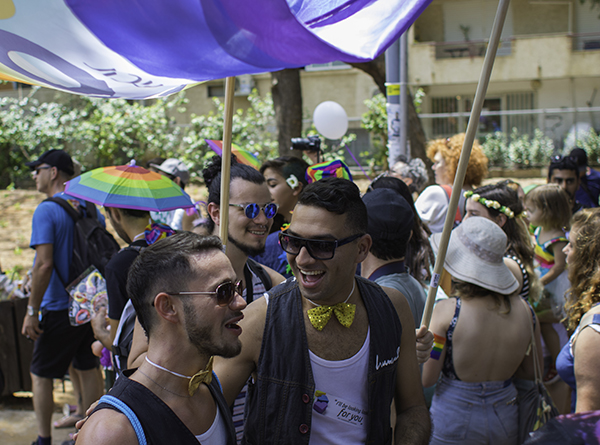 It was really a photographer’s dream: endless smiles—and all of them were completely genuine. 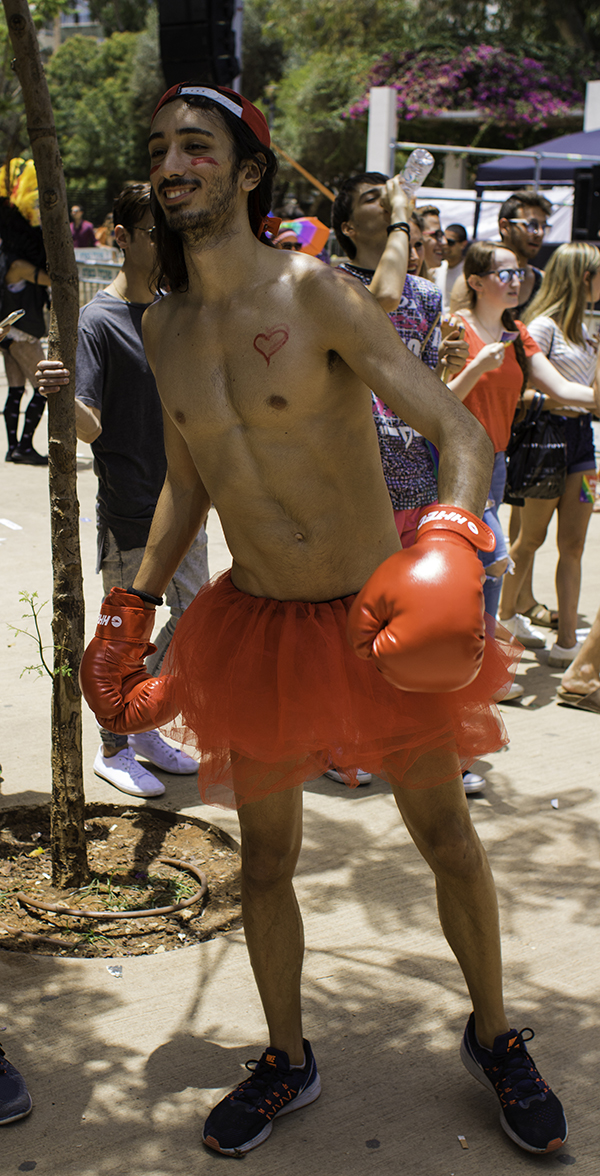 Everybody could not have been happier to be there. But I think the biggest thing for me was just how much everyone seemed to belong, not just at this specific parade, but in Tel Aviv as well. The experience felt quintessentially Israeli. It’s really not a feeling I can place, but it would quickly become a common theme throughout the trip. 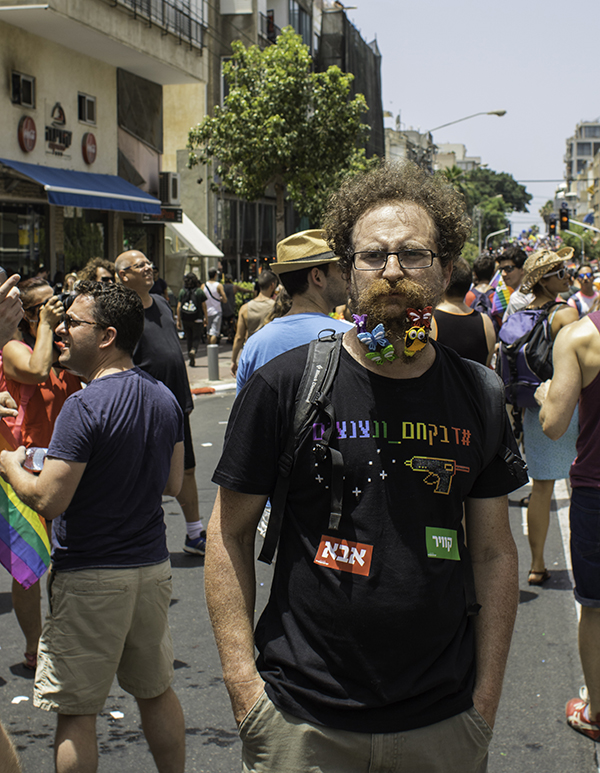 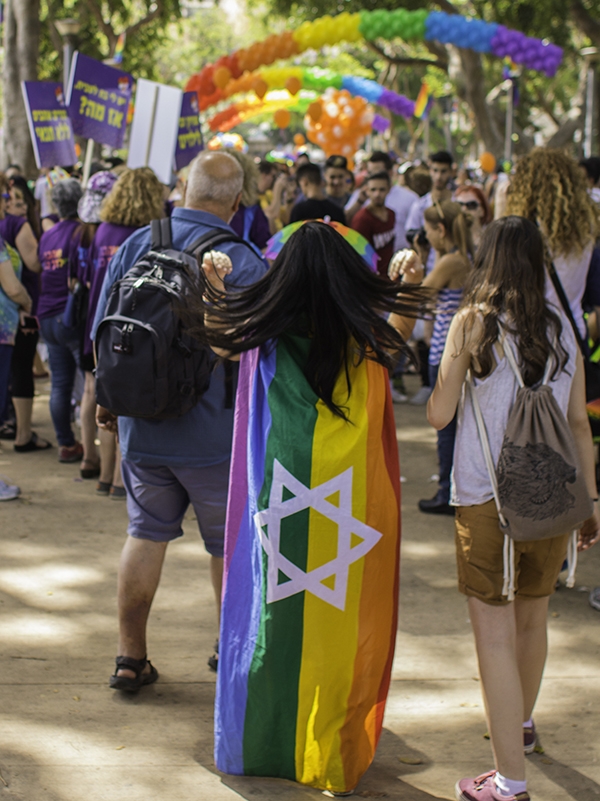 The next day, I got my first real assignment, I was told to walk around Tel Aviv and get as many good pictures as I could find. Whether that was of architecture, 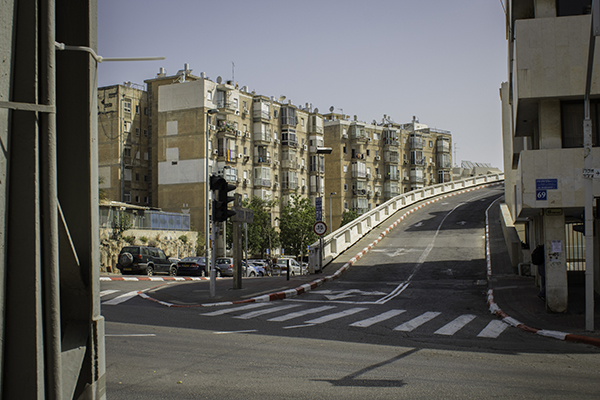 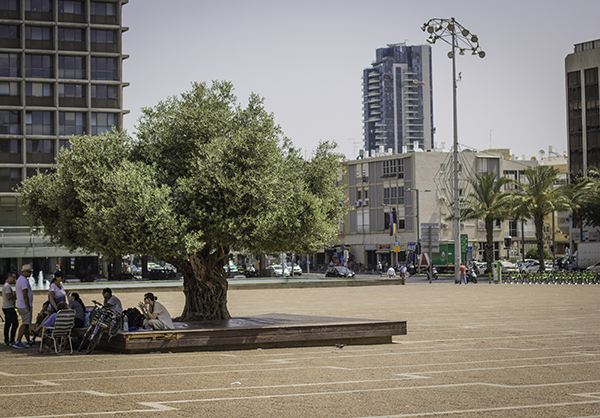 or really just anything that looked interesting. 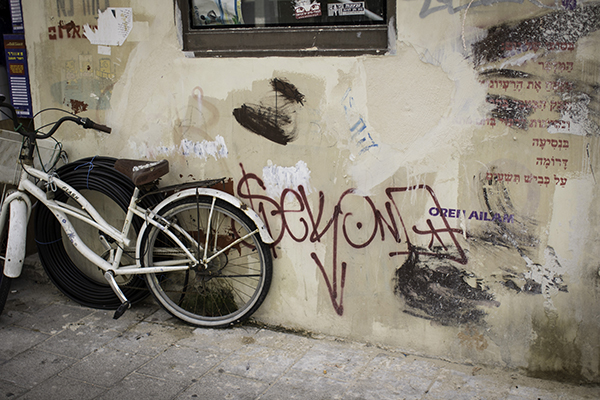 Again, I encountered many people on this little excursion, and again, I kept feeling like everything just belonged.  Along the way, I went through the port of Yaffo, and encountered something that, at least artistically to me, summed up this feeling. While walking back towards the main area of Tel Aviv, 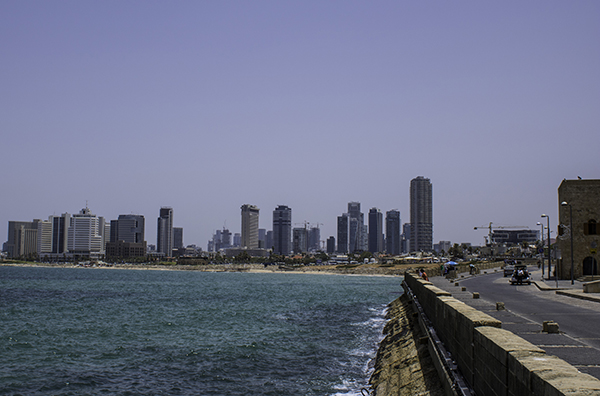 I came across a man fishing by himself in a shaded corner of the port. It was a scene that I as a photographer immediately knew had to be photographed. The colors could not have been more perfect: the man’s blue shirt fit in with the water and sky in the background too well to be real, and the picture was framed almost too perfectly. The elements of the scene fit seamlessly together. 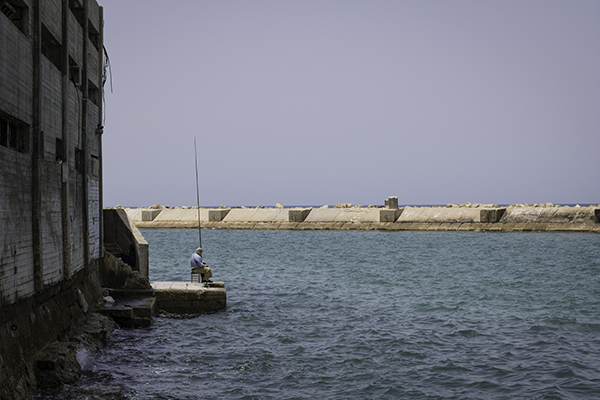 To this day, I still think this is one of the greatest pictures I’ve ever taken. It’s one of those pictures that has more to say each time it’s viewed. It almost tells a story as the viewer traces the lines through the image.
Later in the trip, I had started to go on small excursions with the group that was hosting me. We would go on trips to the beach, 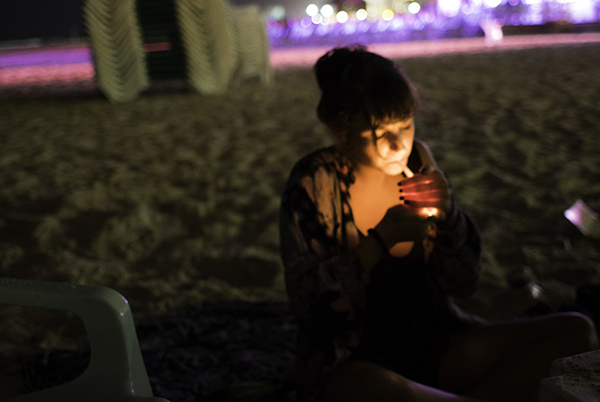 or to areas rich in ancient history. 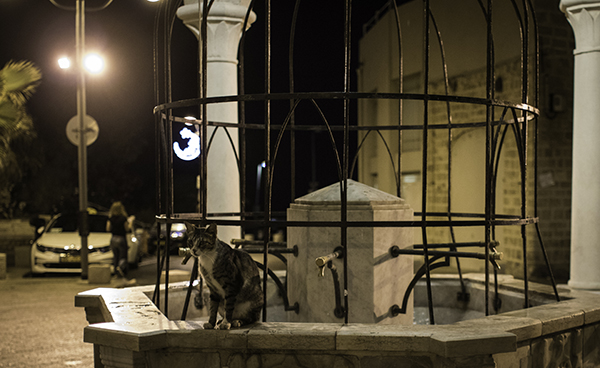 We went to see the market in Jerusalem, and got to hear the stories of several merchants in the shuk. 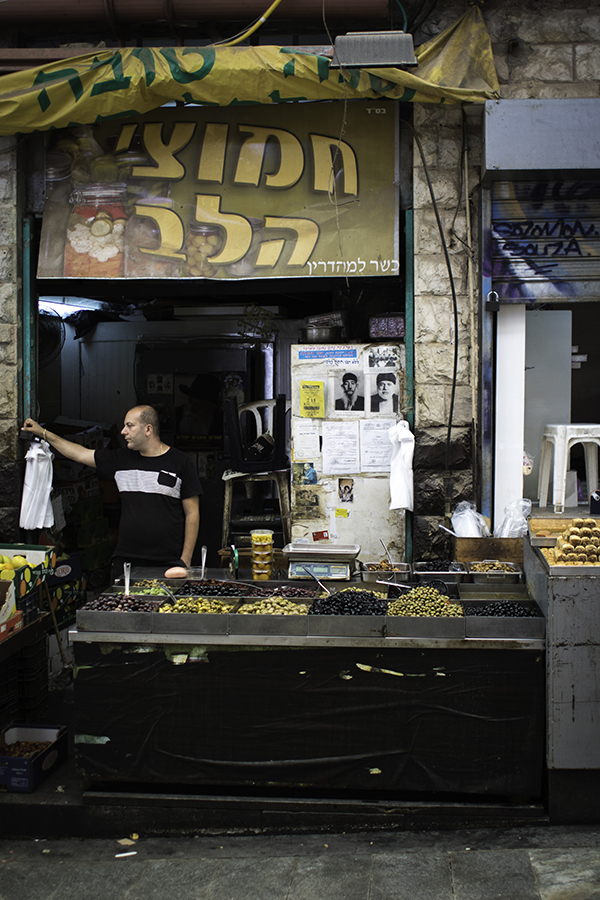 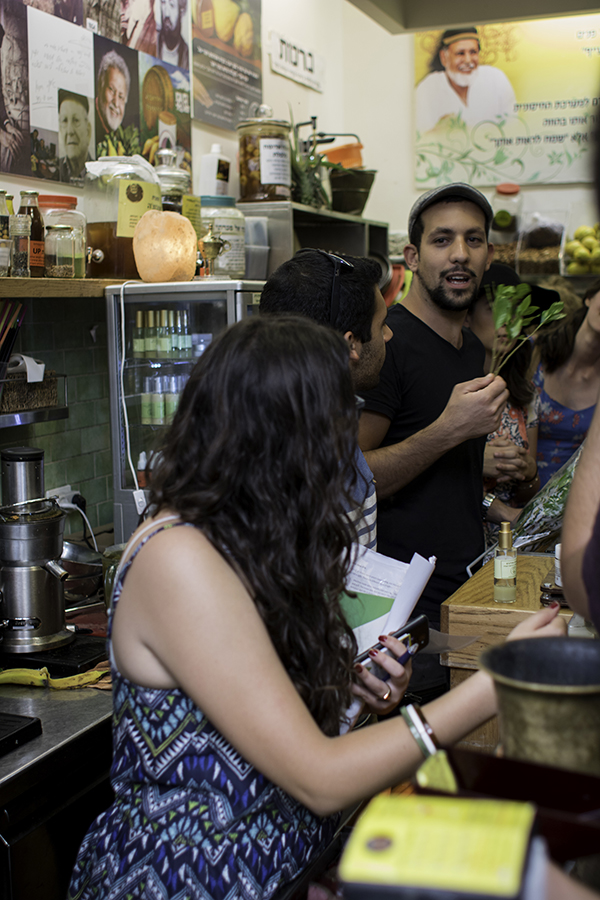 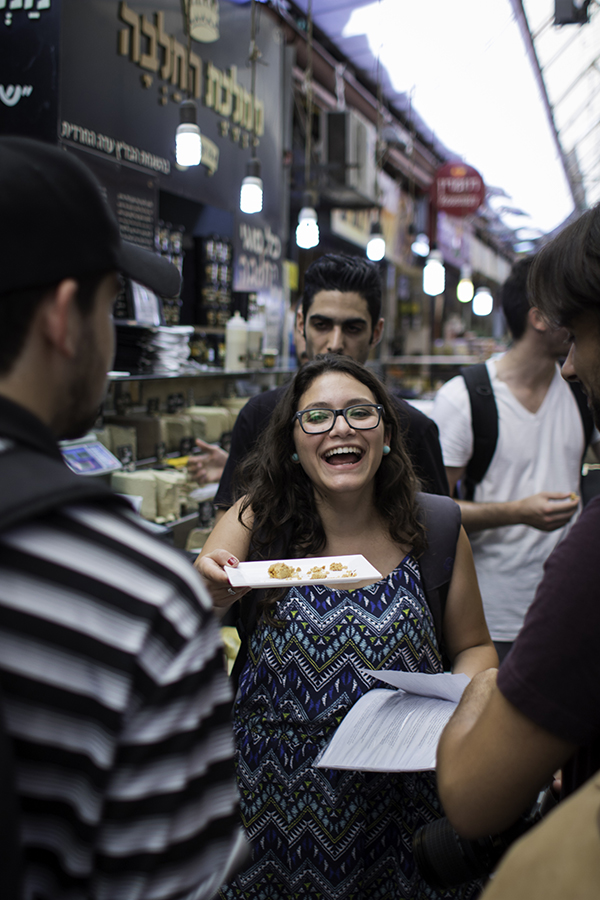 I had gotten an answer to the question I had asked myself when I first got home from my birthright trip when I was 16: Why do people live in Israel?

It’s because everybody belongs there, in some way or another. After countless stories from residents about the humongous sacrifices and risks they had taken to get to Israel, it became abundantly clear that everyone there was actively living out their dreams—the dreams of their ancestors, the dreams of their parents, and the dreams that they had growing up as children and young adults.

The kicker was, for the entire month, I too had been (unknowingly for a while) living out my own dreams. I had always wanted to know what being a photographer for a living was like. Sure, I’d pursued it as a hobby, but I think I really gained an appreciation for the craft during my time in Israel. The people, the places, the scenes, the colors—really everything was ripe for artistic interpretation. Through my camera’s lens, I gained a true appreciation for everything in the country.

Not only did I experience Israel, I lived it. And I loved every single second