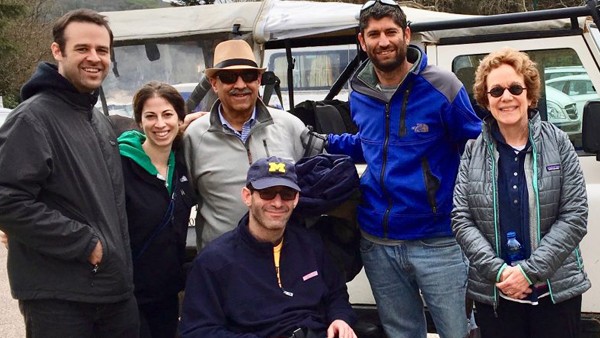 A family finds Israel accessible to people living with disabilities who want to go to the Holy Land.

“Alex always said it—next year in Jerusalem,” said Ariel Weiss, one of Cincinnati native Alex Heldman’s best friends. And of course every Jewish college student knows about Birthright, the free trip to Israel for 18- to 26-year-olds of Jewish heritage. 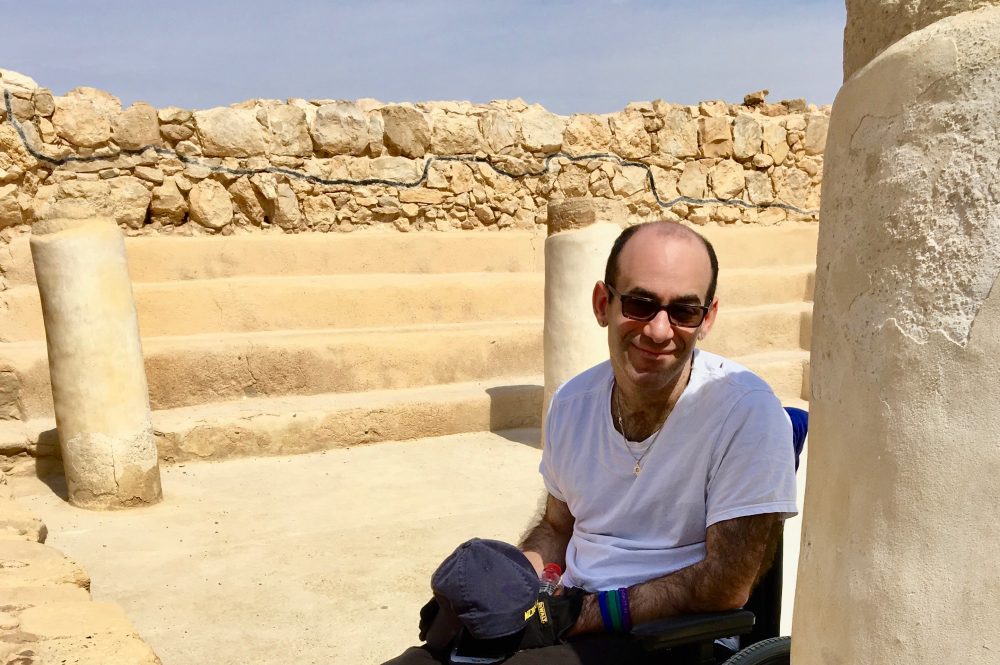 As a thriving Jewish 19-year-old sophomore at the University of Michigan, with Ariel as one of his housemates, Alex hadn’t gone to Israel yet when he flew to Hawaii for a family vacation and got really sick.

It was a nightmare. A virus attacked Alex’s system and after many rounds of medical intervention, including an induced six-month coma to survive non-stop epileptic seizures, he was left wheelchair-bound. Alex now has a diagnosis of severe epilepsy, currently under control with significant medication, and brain injury as a consequence of seizures and the coma.

According to his doctors, it is a miracle that Alex survived. “He was determined: it’s his character,” said his mother, Debbie Kirshner. She shares the story now, some eleven years later, sitting on the sofa in her condominium in Hyde Park with Ariel and her husband Paul Heldman.

What is family life like, once a miracle occurs? “For a long time we were all three focused on rehab,” said Debbie. But it was difficult: “We nearly lost him many times,” she said.

“Then Alex started talking about going to Israel again, and Ariel said she knew it could work, but we just thought No,” said Paul. Debbie listed some of the dangers: flying across multiple time zones can be dangerous when you have epilepsy, because it disrupts circadian rhythms. He needs to take his medications on a certain schedule and the change in sleeping patterns might also be dangerous. The doctors who know him best would be far away. All this, and Alex requires some assistance with mobility. 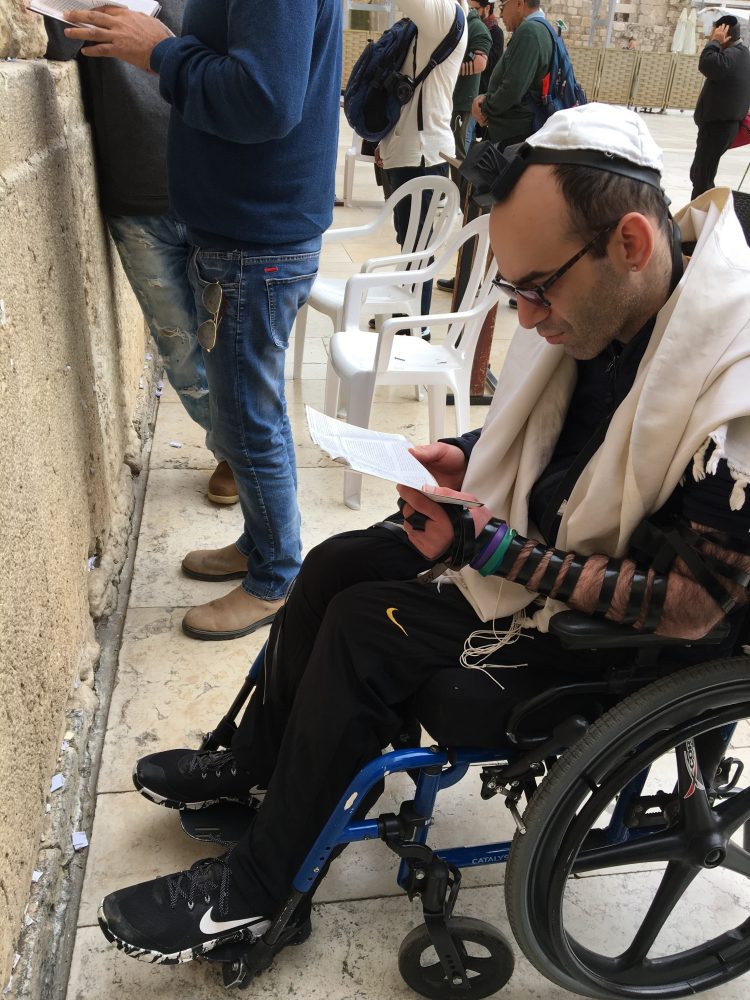 But it had been and continued to be Alex’s dream, and everyone—his parents, Ariel, and Alex himself—felt its power. “This was his lifelong dream, and he missed the opportunity to go on Birthright because he was sick and in rehab,” said Debbie. Despite everything, Alex started researching, in depth, together with his speech therapist, more about Israel and where he would want to go in Israel. Masada.  The Kotel.  The Golan Heights. Jerusalem. He started attending synagogue more and visiting with his rabbi. Paul and Ariel researched possible trip providers who would fully include Alex in everything. Another close friend of Alex’s, Ari Goldberg, wanted to go to Israel with Alex as well. Ari decided, because he had been in Israel on his Birthright trip exactly when Alex first got sick, not only that he wanted to be but that he was meant to be the main support for Alex’s physical needs if they went. It was beshert.

It takes a village

Despite the many and daunting challenges, and after much conversation, Paul and Debbie agreed that this was going to work. And Alex’s doctor at the University of Michigan approved, declaring that Alex was medically stable and, “like anyone, is entitled to have some fun,” reported Paul.

So Paul and Debbie started planning, Ariel and Ari found ways to take off from their work and family lives, and Alex continued, in his determined way, to prepare for something he had been wanting to do since before college.

And in March it happened: they all went to Israel, together, with the help of Israel4All, an Israeli tour group that specializes in helping people with disabilities.

The trip of a lifetime

“My intentions on this trip were to be able to see what I missed out on in my youth, and see the land of my ancestors,” wrote Alex in response to emailed questions, from his current residence in Michigan.

The 13-day odyssey turned out to be the trip of a lifetime. Alex prayed at the Western Wall. They traveled to Masada, Jerusalem, the Syrian border, two kibbutzes, and more. They went to Hula Lake Park in the Hula Valley, where Jewish National Fund created one of a series of accessible nature trails, this one specifically for bird watching.

They ate delicious food everywhere and enjoyed each other, said Debbie, laughing—in shuks, in Jerusalem, at the Dead Sea; breakfast, lunch, and dinner, all at a leisurely pace that was perfect for Alex.

In every location their guide, Eli Meiri, made sure that pragmatics like food, wheelchair-accessibility, and transportation were in place. He approached everything, including how he explained various sites or attractions, with Alex and his interests in mind. Meiri is the founder and president of Israel4All, but is also a trained social worker. “The trip was designed for Alex, at his pace; it required a tremendous amount of sensitivity and experience,” said Ariel.

“It was really a community experience,” Ariel continued. “Part of the pleasure for each of us was doing these Jewish, Israeli things together, creating those memories. I love remembering how much Alex enjoyed the jeep ride—not in a wheelchair—to the Syrian border. ”

Asked for the highlight of the trip, Alex wrote that it was Masada: “It is still a symbol of resilience, strength, and faith against seemingly insurmountable forces. Coming down from Masada, it reaffirmed my faith in Judaism’s continual will to live.”

In 2008, Israel’s Tourism Ministry shored up accessibility at tourist sites around the country, so Masada is now wheelchair-accessible. Alex noted that in Israel, he felt more accepted for who he is: “I felt very safe in Israel.” 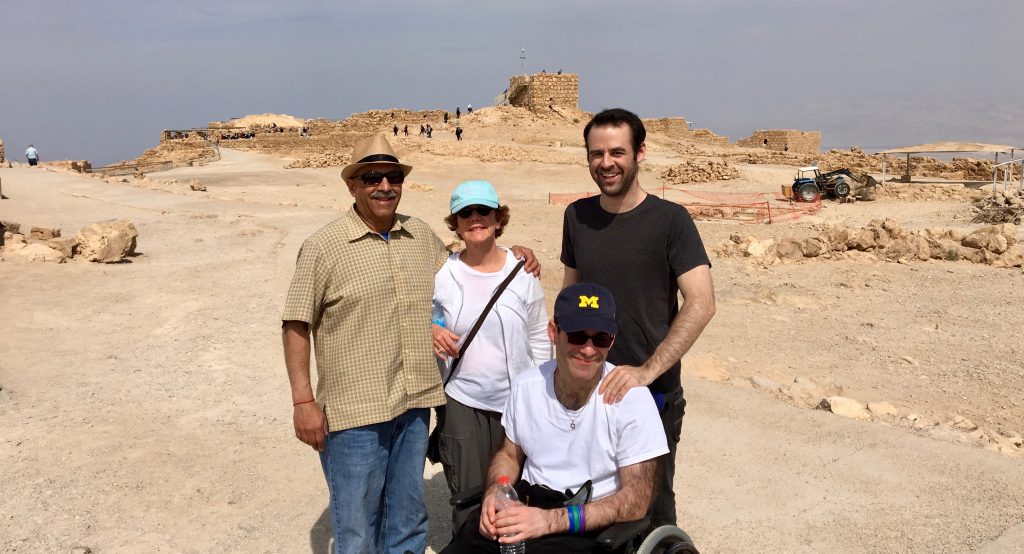 Another miracle: this year in Jerusalem

Alex wrote about how important the trip was to him: “If you are a human being I think it is important to go Israel at some point in your lifetime to see the magnitude of what has happened in one ‘tiny’ country in the Middle East.”

Now that everyone is home safely, Alex’s parents shared how they felt about the trip: “There is a sense of great joy, of accomplishment, and of tremendous gratitude, an awareness of how the universe provides,” said Debbie.

“Physicians who manage this kind of illness in the intensive care unit would give you very grim numbers about survival, about one in a thousand. So he beat the odds,” said Debbie. “And he was fierce in his determination to go to Israel. He was going to make it happen.  It’s sort of another miracle, that we could do this with him.” 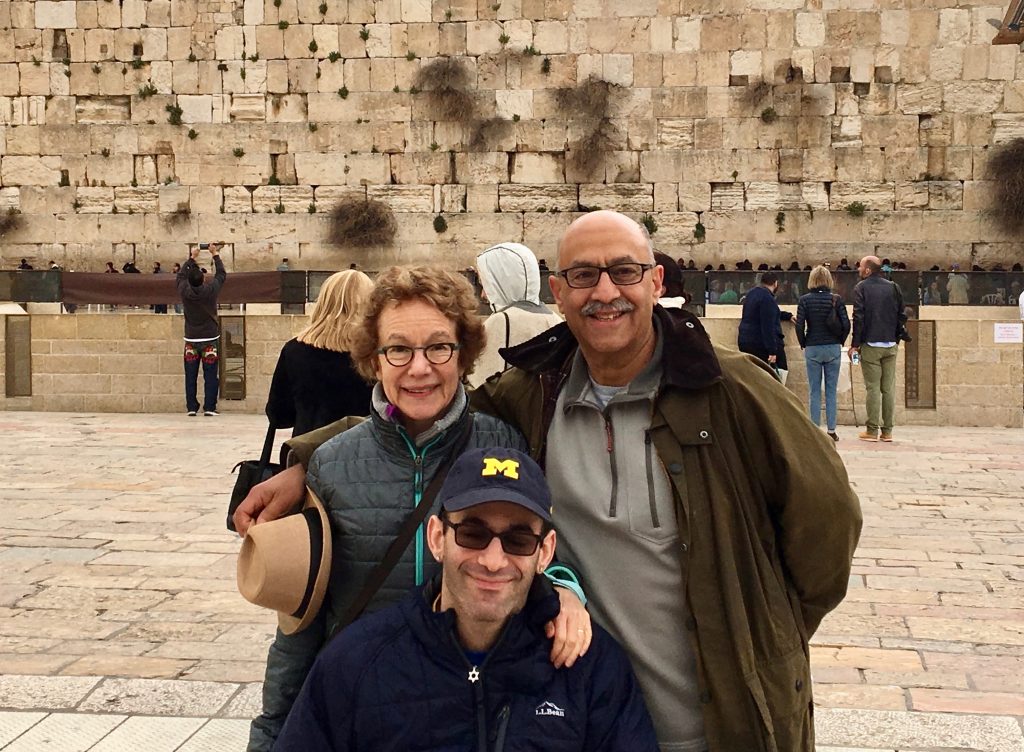 Inclusion for those living with disabilities

Twenty percent of Americans and Israelis have disabilities, but how many are fully included in “normal” life?  “Our trip was amazing, a huge success—so we want people who have disabled family members or who are themselves disabled to know how accessible Israel can be,” said Paul.

“He was able to realize his dream,” adds Debbie.

Back now in Michigan, Alex continues his rehab with his characteristic determination, and advocates for epilepsy awareness. There is no doubt that with two miracles under his belt, anything he is now determined to do, he will accomplish.

The Heldmans toured Israel with Israel4All. Birthright Israel offers the possibility of inclusion into all their regular programs, and two trips especially for those with accessibility issues or special needs. Young Jewish Cincinnatians living with disabilities or special needs can get financial help to go to Israel. Cincy Journeys offers trips for high schoolers and young adults with special needs. Locally, individuals with disabilities and their caregivers can get involved in a variety of events and programs at the Mayerson JCC.

The Jewish Federation of Cincinnati: We look at the whole picture, taking into account the diverse needs of the entire community. Together we can do almost anything.