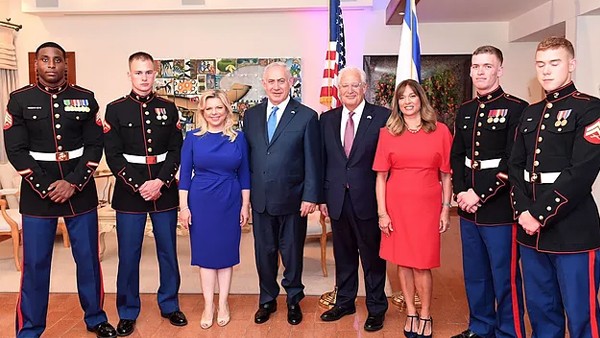 Pictured: Benjamin Netanyahu, America to Israel Ambassador David Friedman, and their wives stand side by side with Marines at a July 4th Party

According to the Jewish calendar, today is the 10th day in the month of Tamuz. To the average Joe, or even Israelite, this means nothing, and that includes myself. However, on the American calendar the date shows July 4th, better known as American Independence Day.

Most think of it as no more than the day the American colonials adopted the Declaration of Independence and plunged themselves into a seven-year war with the mighty British.

As an Israeli, what do you care about July 4th? Most people, again including myself, will utilize today, the 10th of Tamuz, as an excuse to party. Americans will be celebrating freedom seven thousand miles away from home, dancing side by side with Israelis who, despite not being a national holiday, will still in a way be celebrating the very same freedom.

This goes deeper. Tonight, when the shemesh [sun] finally sets and the parties begin, Americans and Israelis will come together and simultaneously celebrate their freedom in a country built upon the need for a Jewish State.

The American Independence represents much more than freedom for Americans, in a way, it represents the liberation of the entire free world, including Israel.

This day represents that while things remain vastly complex within the two separate nations, that their long-standing commitment to each other is as strong as it was on May 14th, 1948.

Both Israel and the US represent ample opportunity for our company to grow, succeed, and continue our success. Our team consists of several nationalities. We have two Americans, from Ohio and California, another person from Panama, one from France, and lastly one from Venezuela. Although we vary in our geographic make up, we are all linked by heritage and love of Israel.

The work that both the US and Israel have put forth to attain and preserve their freedom are one of the biggest reasons the Tryna Grub team was assembled. We thank both countries for their support and dedication to one another.

The Tryna Grub team would like to wish everyone worldwide a Happy 4th of July! Be safe with fireworks, do not eat too much red meat, and #GrubOn.