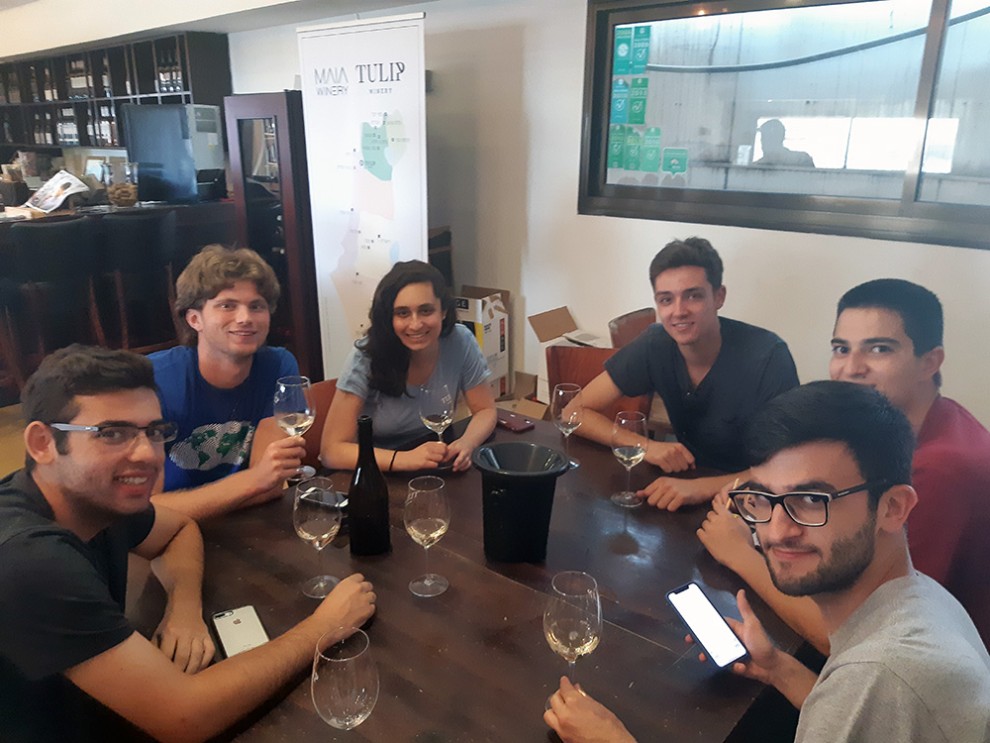 Just a few days have passed since my first blog post, but fear not: The Cincinnati Onward group had another busy week of work and travel, and I’m here to catch you up to speed on everything we’ve been doing.

Ahead of our second week at our internships, we took Sunday to head north to Haifa for our first Israel Now day. Throughout the summer we get off work for 3 separate day trips to various cities and regions throughout the country, and our first trip was to Haifa.

We started our Sunday by visiting BINA’s Haifa campus, where we met one of their staffers at a nearby garden. After talking about the city’s history and the day ahead of us, we read an excerpt from the Talmud about planting carob trees. The story was an analogy for planting some sort of foundation for those that come after us, and how we can leave an impact on them without even necessarily meeting them. We then took time sharing what “carob trees” we can find in our lives and ways in which we can plant one for those that come after us.

Next, we went to a local Druze village and sat with a native in the community and educational center to discuss the entire background of the Druze people. His extended lecture of the people and their history concluded with a Q&A, believe me we had a lot of questions, and then we were able to walk around the village with him. Aside the stunning views from all angles of this hilltop village, it was especially interesting to get a tour from someone that was born and raised there and was super knowledgeable of Druze history. 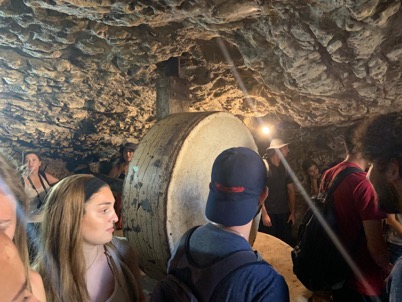 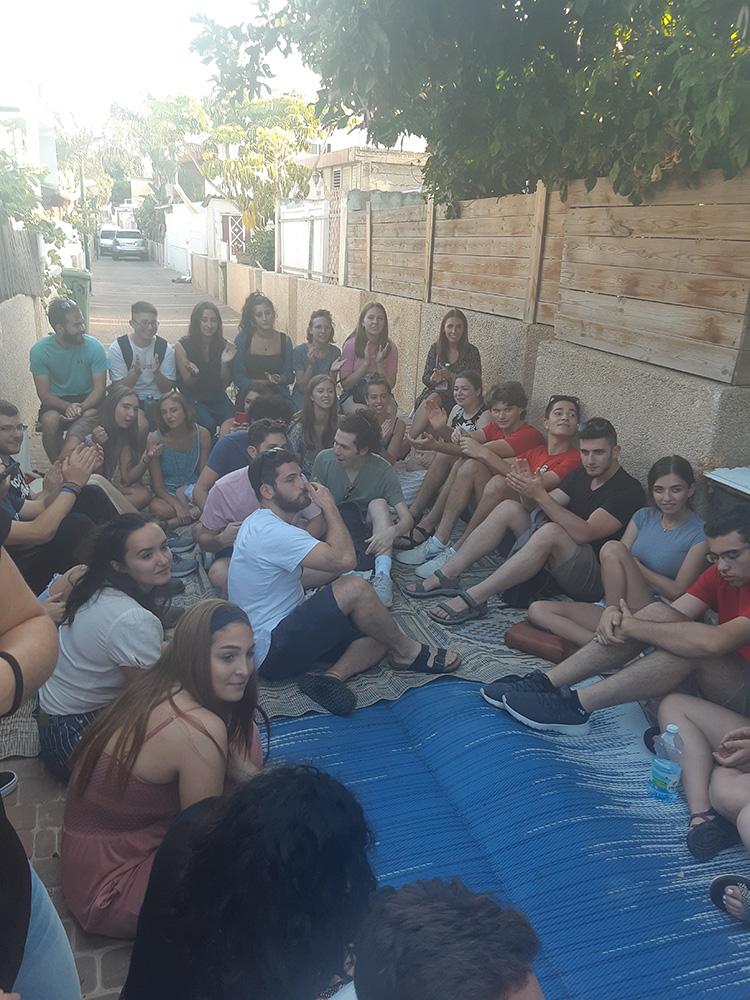 The third part of our day was spent at Tulip Winery. The property itself wasn’t all that big so we didn’t partake in a walking tour with looks behind the scenes, but instead sat in their tasting room for an educational talk and wine tasting session. Before tasting a few of their best, we learned that Tulip Winery was located in Kfar Tikva, a community where a large disabled population lives together. Since 2003, Tulip Winery has employed members of Kfar Tikva, emphasizing the importance of social responsibility as a business in the community. 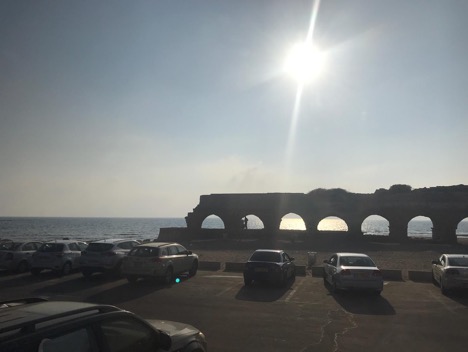 We wrapped up our day in with a quick trip to the beach in Caesarea, just south of Haifa. With some large aqueducts along the beach, we had a lot of time to explore and take cool pictures atop these ancient structures. Before we got back on the bus, we circled up and reflected as a group on our day in the north. 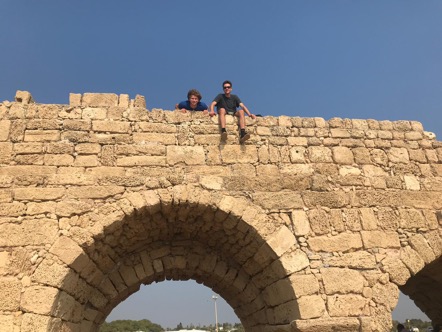 We returned to Tel Aviv for dinner and rested before our second week of work. Thursday afternoon, a lot of us left work early in preparation for our Shabbaton weekends. Several weeks before Onward began, we filled out a form meant to gage our interests in certain weekend programs throughout the summer, and this past weekend saw the first 7 Shabbaton opportunities occur.

Topics ranged from spirituality and mindfulness to geopolitics and ecology, and every single Onward participant is assigned to one of these two-day trips throughout the summer. The first weekend of Shabbatons was the busiest, so most of our group was spread about the country participating in various programing.

I was joined by three other Cincinnati participants in Tzfat for a weekend of spirituality. The two times I had been to Tzfat before, my groups had only been passing through for a few hours. This time around, I spent two nights in the city and finally got to experience Shabbat there. At first glance, people remember Tzfat for the art district and the majestic, hill-side views from rooftops, but many will tell you Shabbat in Tzfat is what makes the city so special. Some of the most sacred prayers we sing at the end of the week were actually written in Tzfat in the 1500s.

This weekend gave me an opportunity to branch out and meet people doing Onward other than the Cincinnatians I share an apartment with, all while participating in relaxed programming such as a meditation. The most unique part of my experience, however, was what I did with my free time on Friday.

Jack Loon and I were walking through the art district when we realized we weren’t far from the studio of Avraham Loewenthal, a native of Michigan who has spent the last several years in Tzfat practicing Kabbalah and creating kabalistic artwork. Avraham is best known for his frequent slate of Birthright groups that visit his studio and home, but he always recommends coming back if we’re ever in the area. Jack and I caught him right before a group was stopping by his place, but he gave us one recommendation for the weekend: Go to Ari Mikve.

Jack and I had never been in or really ever considered entering a mikve (a ritually purifying bath in Judaic culture), but with four hours to spare in Tzfat, Avraham convinced us that we’d need to try it out. On our way there, we spotted someone with a towel on his back. We asked if he was heading to the mikve, which he was, and he introduced himself before debriefing us on what we were about to experience.

He told us his name was Shalom and he was originally from Massachusetts. At the conclusion of his Birthright a few years ago, he decided to stay and move to Tzfat. Because he goes to the mikve so often, he hooked us up with free towels since he’s so familiar with the two towel guys that patrol the sacred area.

Mikvot are spiritually purifying on their own, but what made this one so unique is that it’s a natural spring. It was very clear that, as first-timers, Jack and I were getting the real deal with this experience, and it’s safe to say that no one else on our Shabbaton went that weekend. What made it so meaningful for us was Shalom telling us to think about anything in life that we felt blocked by, something holding us back. We each submerged our bodies under the cold but refreshing water 3-5 times, dried off and left to Mikve knowing that was the highlight of our weekend, if not the whole summer. It was that cool.

Because of Shabbat, the Shabbaton groups were unable to travel back to Tel Aviv until after sundown Saturday. We all came back to the apartment pretty late at night, only to get up for work just a few hours later. It was an exhausting week to say the least, but by the end of it I felt accomplished: I socialized with dozens of Onward participants from other programs, explored a city other than Tel Aviv and really settled into my role at work.

On next week’s blog, I’ll talk about the group’s time at the Future IL event, a midweek evening activity and our second Israel Now day.

Caryn works at The Language Kindergarten, where kids with disabilities go to develop their skills with an occupational therapist, physical therapist and speech pathologist. Caryn shadows individual sessions with kids and learns of different strategies and treatments for certain kids. She is especially interested in the different practices between speech pathology professionals in Israel and the US. 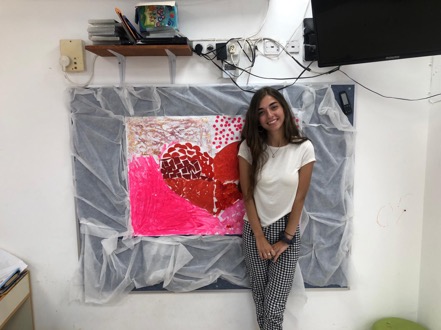 Adam works at Minute as a data science intern. Minute turns static thumbnails into condensed videos to increase traffic and ad revenue, so Adam examines the company’s data sets and figures out how to enhance their revenue and system. The workplace is easy-going yet professional with lots of dogs around the office on a regular basis, but Adam is already gaining a better understanding of what it means to do data science. Reporting directly to the CEO and CTO, Adam is eager to add real value to Minute while gaining practical experience in his field. 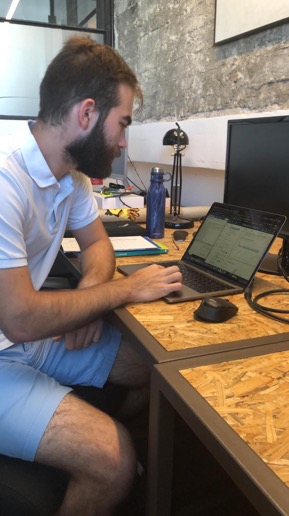