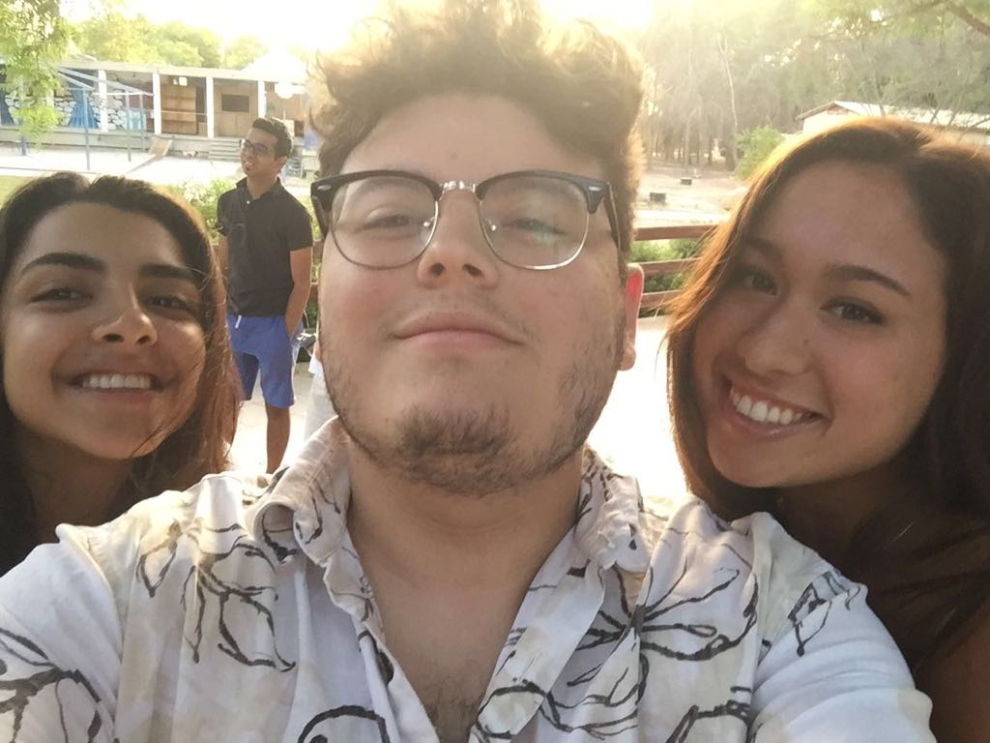 I wanted to start this week by writing about one of the people from Cincinnati interning in Tel Aviv this summer! 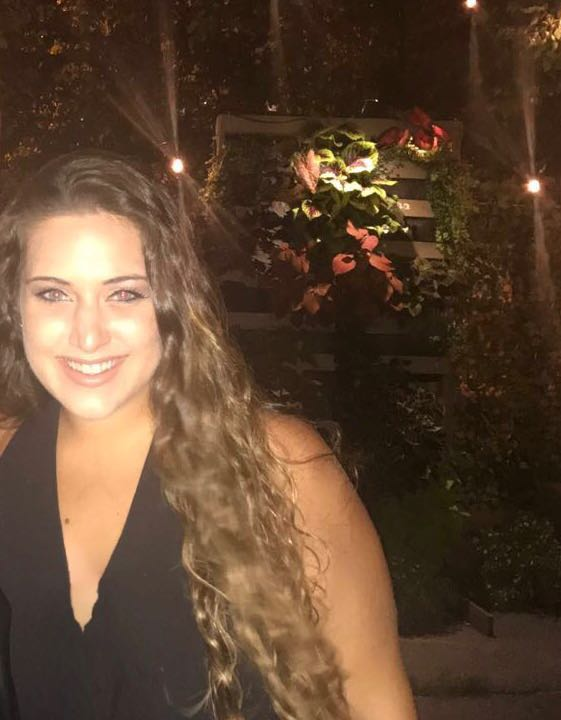 Susan Brownstein in Tel Aviv out for dinner.

Susan Brownstein is a 22-year-old recent Butler University graduate. She is interning this summer at Dataworks, an e-Commerce agency that works with various companies (including Aldo) in Israel and worldwide. At her internship, Susan is responsible for digital marketing for Dataworks’ own e-Commerce company, Brklz. Brklz produces jewelry for dogs that is easily attachable to harnesses and collars. There are various collections, including, but not limited to Swarovski crystal pendants. Susan is currently reaching out to influencers on various social media platforms to promote Brklz jewelry. She is also creating e-mail sequences and newsletters as well as other marketing tools for communicating with Brklz customers. She is looking forward to the coming weeks of her internship working with the Brklz brand manager and exploring Israel with the friends she has made on Onward!

This week on our trip was not a typical work week for members of our group. We started the week again on Sunday by returning to our internships, but instead of going back to our normal internship work on Monday, we took a day trip. On our trip, we went to the southern part of Israel and we were accompanied by another Onward group from Penn State. On our trip, we were given the opportunity to visit a museum about the town of Gush Katif and to learn about the history of that part of Israel. After our trip to the museum, we ate a pizza lunch at the park in Sderot. Following lunch, we went to a dance studio and were taught interpretative dance. There were many different parts to the class, like learning to focus our weight on different parts of our feet and dancing around the room with our group. We went to the dance class to see that even though people there live in a war zone, they still live lives similar to ours.

Once the dance class was over, the group got to visit a kibbutz near the border wall and hear another story from a British woman who has lived in the Netiv HaAsara area for decades and even raised her children there. The tour at the kibbutz ended at the border wall, which was beautifully decorated with various paintings and mosaics. We also learned that Netiv HaAsara is translated to English as Path to Peace. All throughout the day, we learned what it was like to live in an area that is so close to a war zone. 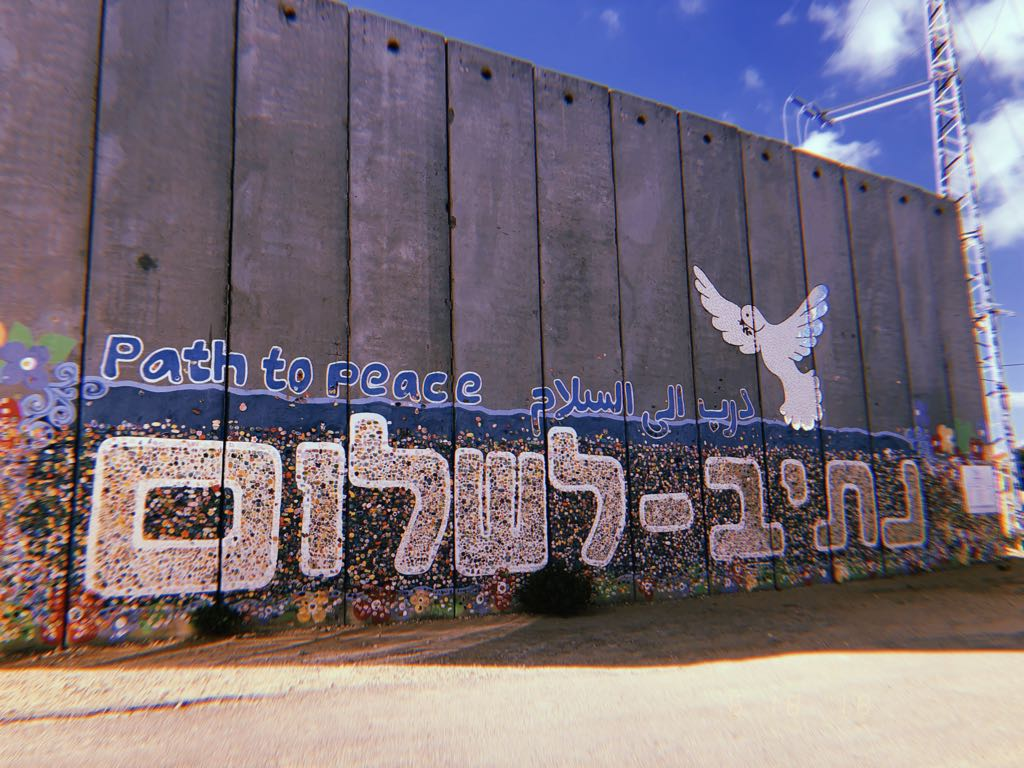 A picture of one of the mosaics and paintings on the Border wall in southern Israel.

On Tuesday, we went back to our internship programs. Some of us, like myself, just had our normal day to day work this week. But others, like Ali Richter, got to participate in workshops and programs outside of their office buildings. Ali attended a conference called the Alchemist Money Summit. The summit was all about blockchain and startup companies. She even got to hear from one of the people who helped to found Bitcoin! Cameron Foy attended the WeWork Creator Awards in Jerusalem with his internship program. The WeWork Creator Awards are a competition between different WeWork startup companies to see whose business venture has the most potential. Cameron described it as similar to the TV show Shark Tank, and his team placed 3rd in the competition! He also got to see Netta Barzilai perform for a second time. 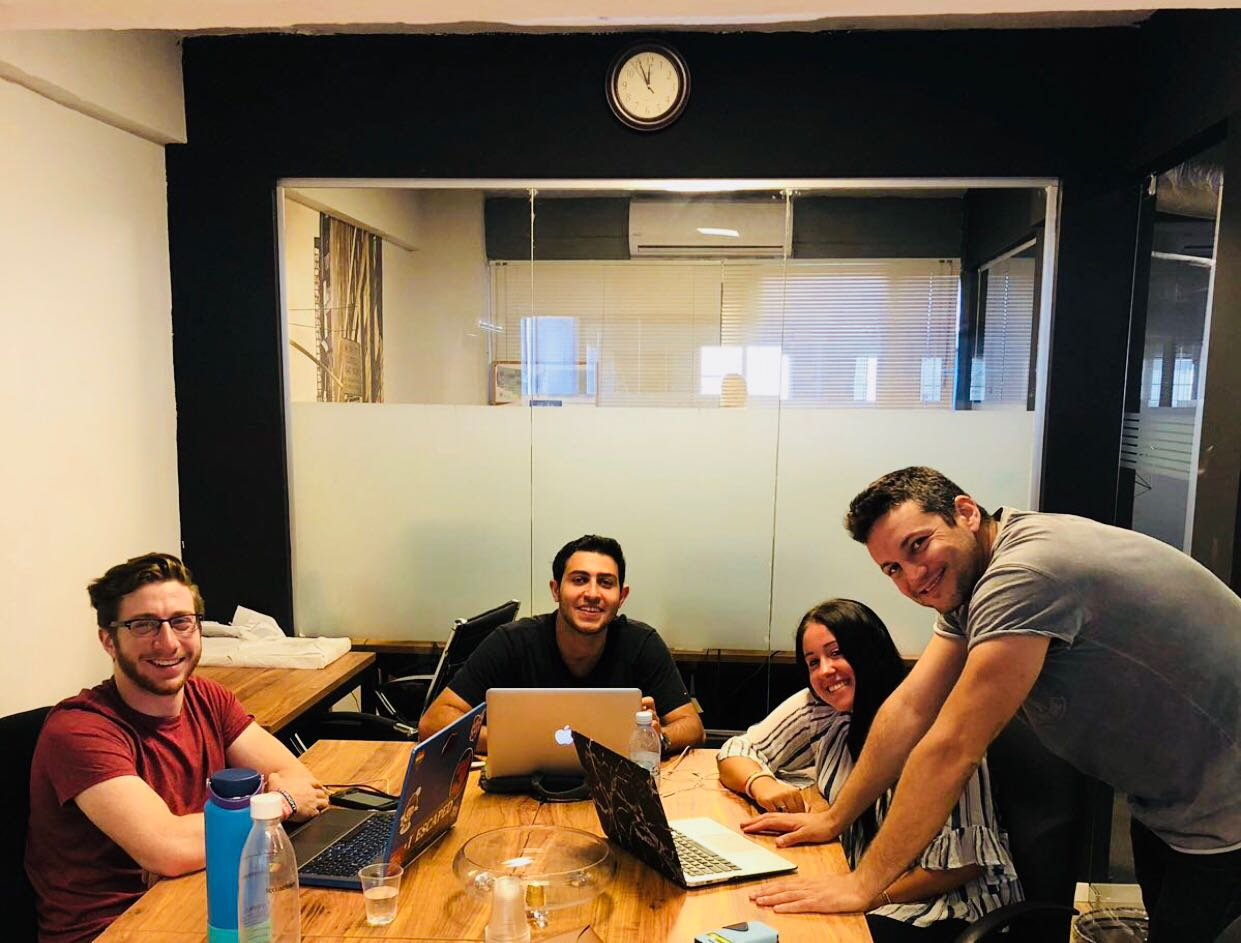 Ivan Meisner (left) at TAU innovation, where he is an intern. 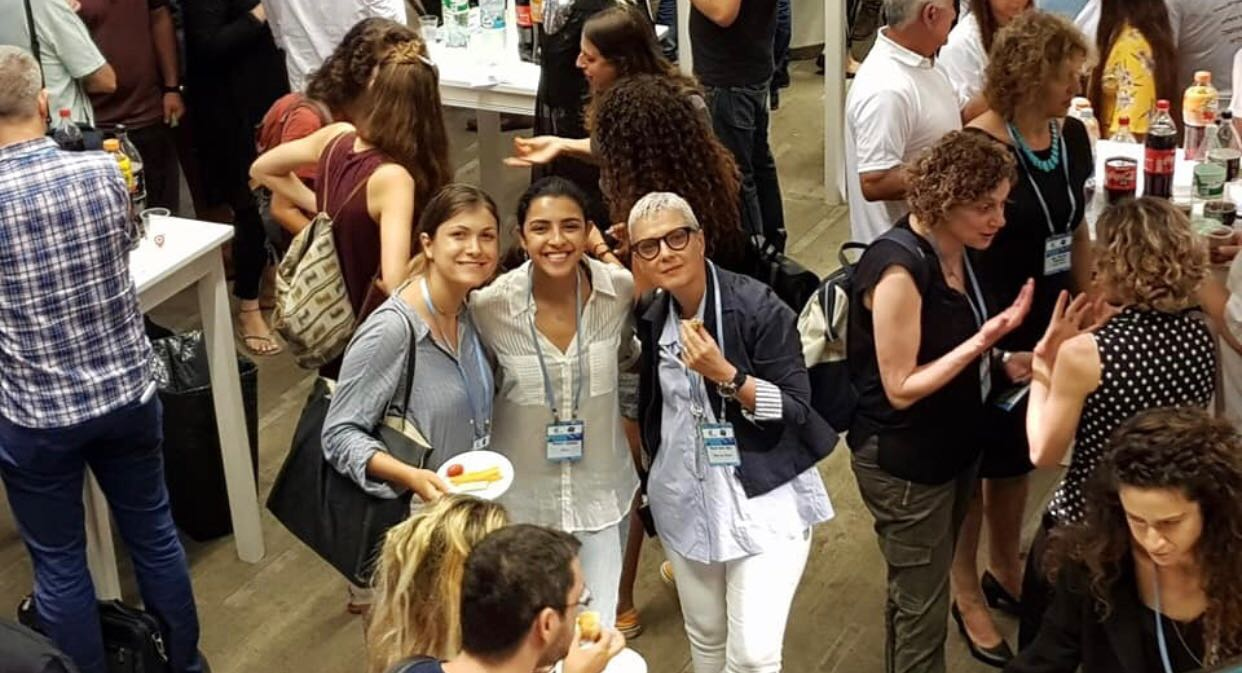 Kelsey Jobalia (middle) at a conference networking and meeting new people while interning at Startup Grind.

Over the weekend some of our group members participated in different breakout sessions, which are weekend trips sponsored by Onward outside of Tel Aviv. At the breakout sessions, the different groups did various activities and learned even more about Israel. There were four separate sessions during the weekend, one group traveled to Jerusalem, one went to the Negev desert, another went to the city of Tzfat, and the last group went to Modi’In. It was special to see how people all over Israel celebrate Shabbat in different ways.

I personally participated in the trip to Modi’In where we visited the Hava & Adam farm. On this trip I, along with Susan Brownstein and Marisa Warm, learned all about permaculture and living a sustainable lifestyle on the ecology farm. Throughout the weekend, we participated in various workshops including survival skills and herbal medicine, and we even learned how to create bricks and buildings out of mud! On the farm we ate all vegan food and became close with the people who lived there. 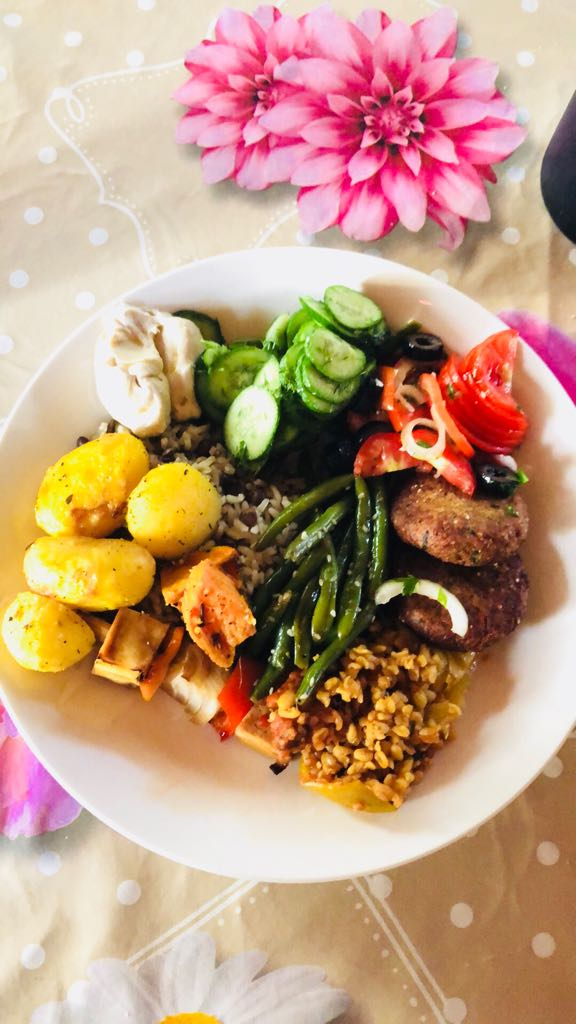 Some of the yummy vegan food we got to eat while on the farm. 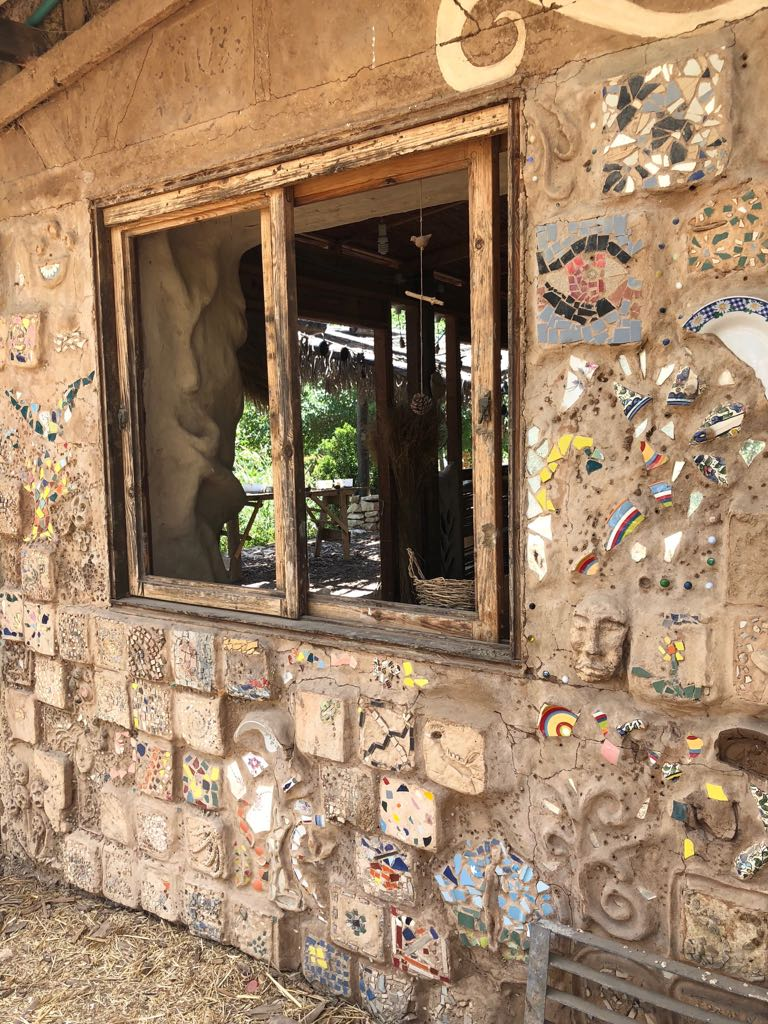 One of the buildings on the farm that was created using mud building techniques and recycled plates as mosaic pieces.

Bradley Greenberger and Reagan Heck spent the weekend in Jerusalem, participating in multiple group discussions. Topics ranged from the different religions people in the area practice to the more than 100 settlements within the West Bank. During free time, Bradley visited the Old City of Jerusalem and Reagan got to visit her family members who live nearby.

Sami Abel, Isabel Boyle, Avocet Greenwell, Jay Klein, Sam Myers, Ali Richter, Maddi Weiler, and Olivia Wolf traveled to the city of Tzfat. They got to watch the sun set over the mountain and welcomed Shabbat together along with some Tzfat natives. The group participated in several activities while in Tzfat including hiking and an art tour. They got to bake Challah in a 16th century oven and watch a traditional musical performance afterwards. Another activity they got to participate in was a meditation workshop. They ended their weekend by watching the sun set again and closing Shabbat. 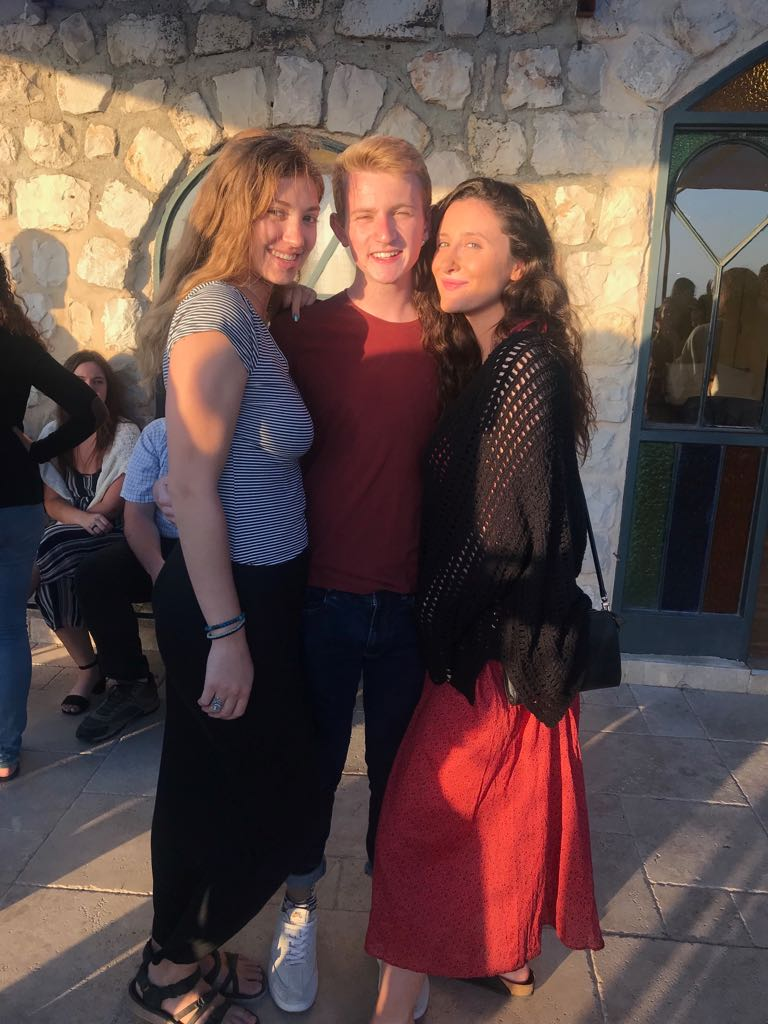 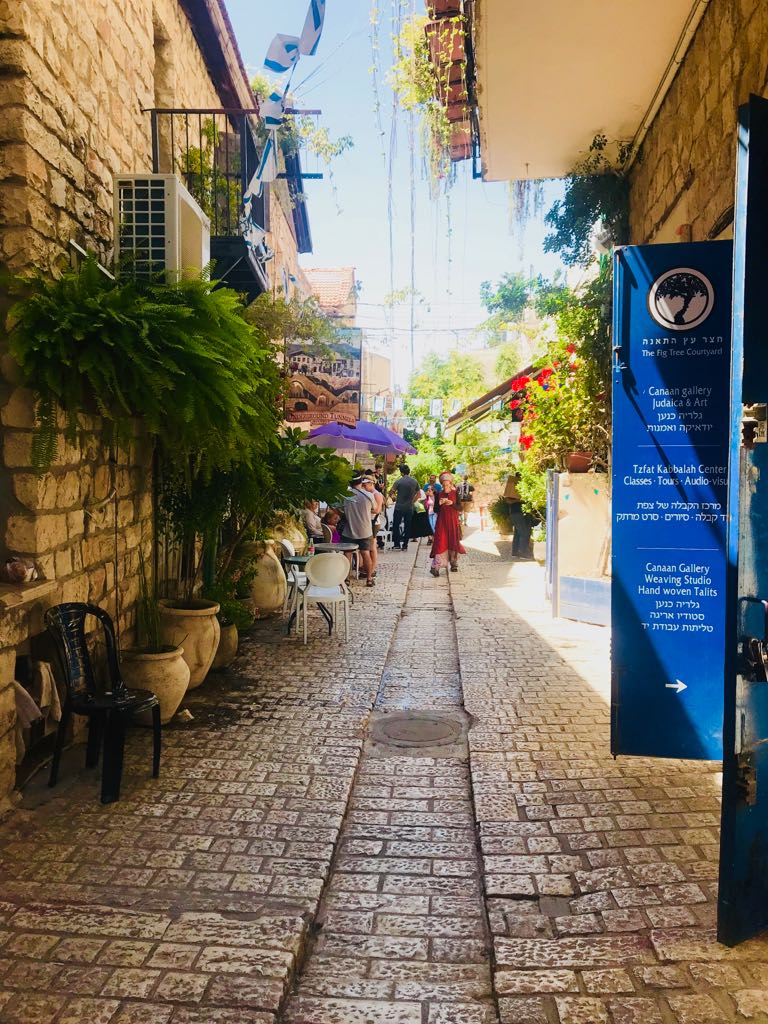 A nice photo of a street in Tzfat where the group toured.

Ezra Babcock, Michael Edelheit, Sophie Greenberg, Kelsey Jobalia, and Ivan Meisner traveled to the Negev Desert. In the Negev the group learned about the rebuilding that is being done there. Sophie explained to me how she learned that the population of Israel is set to double soon and the people of the Negev are attempting to build it up to accommodate the growing population. As of right now only about 8% of Israelis live in the Negev Desert. The group also visited the city of Be’er Sheva and toured around. During their free time, the group relaxed by the pool, swam and even got to stargaze.

The rest of the group did not participate in the breakout sessions this weekend because theirs are scheduled for weekends later in our trip. Bradley Bolotin, Cameron Foy and Maddie Smith all remained in the Tel Aviv apartment during the weekend. The trio says they spent the weekend relaxing on the beach and enjoying the peaceful, newly quiet apartment. Jordan Seibold also spent the weekend in Tel Aviv and stayed with her mother who was in town visiting. Just like Bradley (Greenberger), she and her mom also visited the Old City in Jerusalem! We all had so much fun this whole week and are really excited to get back to work on Sunday morning.

Onward Israel 2018 Week 1: Getting in the Swing of Things