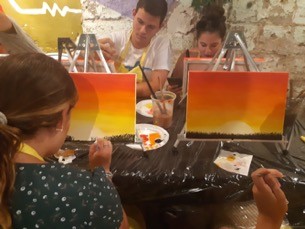 Hi, it’s Will Coleman. In less than one week, the 2019 Cincinnati Onward Israel participants will return home from a near-two-month experience abroad. Our respective internships are coming to an end in the next few days, but there’s much more than work going into the next week. We’ll have our last evening activity as a group, the final chance to go to the beach and our favorite food spots, our last Shabbat together and a debriefing day at BINA.

This past Wednesday evening, we attended multiple Chuggim electives around Tel Aviv. A few months ago when we signed up for different Shabbaton weekends, we also put requests in for these electives. Cincinnati participants enjoyed various programming that consisted of painting, a walking tour and a short film viewing.

A majority of the Cincinnati delegation was at Florentina Restaurant Bar for a night of painting with our madricha Eden — the Chuggim’s supervisor — and Paint Bar, a traveling group of artists that set up groups with canvases and run them step-by-step through a simple-yet-detailed painting. Some of us went in a different direction or went for a more abstract approach, but before anybody could put paint to canvas we enjoyed a delicious series of shareable dishes from the restaurant. At the end of the night we walked away with colorful canvases and full stomachs, a successful night to say the least.

Our apartment is in the center of Tel Aviv but we’re not too far from Jaffa, the oldest neighborhood in the Tel Aviv-Yafo municipality. Some of us had the special chance to partake in a walking tour around historical Jaffa and learn more about the area’s Israeli-Arab conflict. As wealthy Jews are making their way to Jaffa and flipping ancient housing into expensive properties, the cost of living is starting to take on a new form which has lead many Arabs to leave the area. After the tour, the group had a chance to listen to and speak with a Christian Arab from Jaffa to hear his side of the story. He said that even if he is forced to leave, he wouldn’t want to because he feels it’s his responsibility to stay where his family has been for the past 100 years. The conflict has caused a lot of moving around of many Arabs, and he doesn’t want his family to become a victim of that.

Another set of participants spent the night at a community center with a smaller group that met for pasta, salad and cheesecake before heading to a private screening room. A filmmaker shared her documentary about her family, an orthodox family with ten children, and their relationship with her adopted sister, who had been in and out of jail frequently at the time. Enrique Rosen thought the film touched on a lot of important ideas about unconditional love and family. The filmmaker then stood before the group and shared her insight on her creative process and what it’s like to make a documentary, let alone one about your own family. Next, they watched a short film that a man made at a religious film school in Israel. It was the first film of its kind in Israel, a dramatization of what it’s like as a gay man in an Orthodox communtity. It sent ripples throughout the country and jump-started a nationwide discussion about the topic.

Chuggim were a great way to meet new people and enjoy a unique type of programming. We all chose topics that interested us and got to spend quality time with new friends and old. In our final week in Israel, we’ll work the final days of our internship and take advantage of every chance we have left to explore the city. See you next week, Will.

Micah works as a community manager at Wisdo, an app that helps create support networks for people experiencing mental health related issues. Micah’s job is to research and reach out to various businesses and organizations that he thinks might want to partner up with Wisdo. Micah is very passionate about his studies and desire to go into clinical work and therapy, and he describes this internship as “enlightening” in relation to his future career path. As the app’s only intern, Micah enjoys the chance to interact with his 15 co-workers, who like to help him practice his Hebrew and play ping pong in the office.

“Onward is an opportunity that more young Jews should seek out because it’s a way to experience Israel far beyond just traditional tourist sights, and allows you to see what it’s like to actually live in Israel, take in and learn about the culture.” 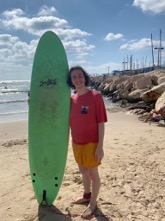 Francine works as a reporter for a NoCamels, a news site that covers Israeli tech, startups and innovation for a global audience. Francine writes news briefs and releases on major events for the website, but also has long-term, ongoing stories that she spends a lot of time on. When writing a story she’ll do her own research, interview necessary people from the tech industry and then craft the piece to perfection. NoCamels is located at IDC Herzliya, an interdisciplinary and international college, so Francine enjoys the opportunity to look for a nice spot to work at around campus. Francine’s favorite part about the job is the amount of responsibility given to her as an intern and that she’s able to see her work published online.

“Onward has helped prepare me for a future career by building my confidence within a professional setting and by shaping me to become a more diverse and global thinker.” 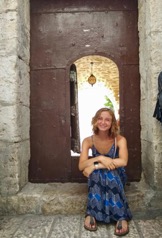