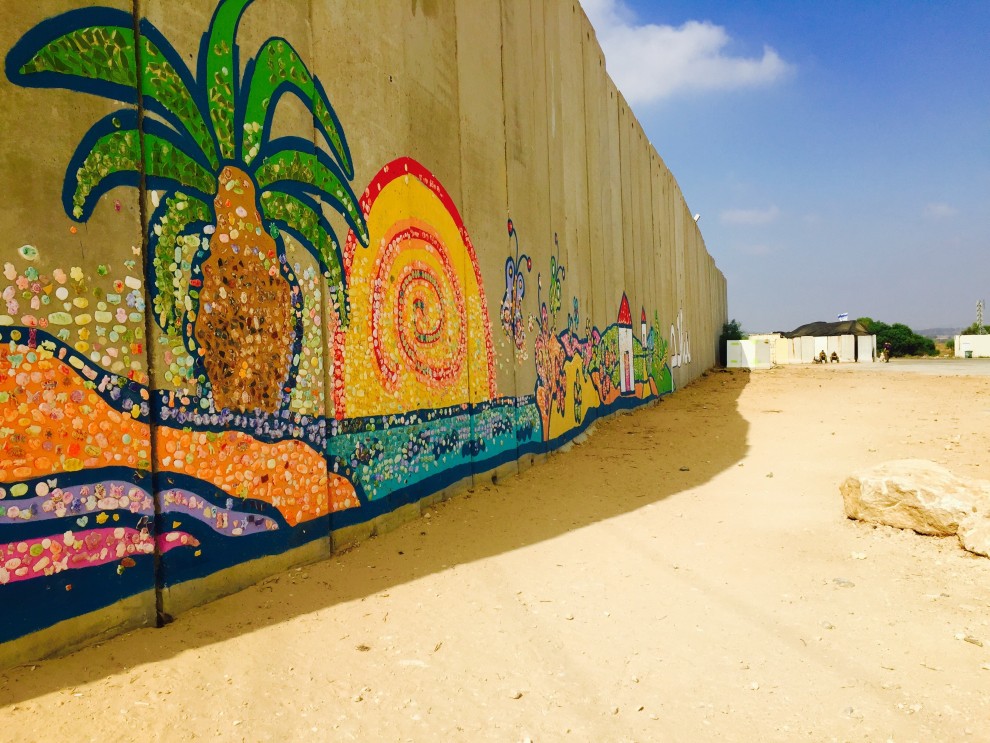 15 seconds: the time civilians in Sderot have to reach a bomb shelter located 100 meters away to assure safety from rockets fired from the Gaza Strip. This is the sad reality for the people living in Sderot, a town of 25,000 people located just a few kilometers away from the Israeli-Gaza border. It doesn’t matter if you’re a small child playing on the playground during recess, an elderly person who needs walking assistance, or someone sleeping in the middle of the night, you only have 15 seconds.

This past Monday was spent learning about the history of Gaza Strip conflict through the eyes of the affected individuals. We first visited a museum that commemorated the Jewish communities of the Gush Katif settlements in the Gaza Strip. From 1967 on, Israeli life flourished in this region. Vibrant communities based on self-sustaining agricultural practices emerged as the Israeli settlers quickly began to identify the Gush Katif as their permanent home. The story is familiar: after much conflict in the state of Israel, and specifically in this region, characterized by bombings of busses, restaurants, and public spaces, Prime Minister Ariel Sharon enacted the Disengagement Plan in the Gaza Strip in hopes of creating peace with the Arabs inhabiting the region. The untold story is that of the Gush Katif people. Many of these individuals were utterly devastated when they were forced to leave the place they had called home for so many years. They had to find new jobs, build new houses, and make new friends, all while dealing with the post-traumatic stress associated with knowing that you will never be able to return home. These after effects were evidenced by our tour guide, who still keeps the keys to her house and office in the Gush Katif, in hopes of someday returning home. Our tour guide, who lives close to the Gaza Border, felt the evacuation was for nothing, as she is still hiding from the rockets shot from Muslim extremist groups just as she was in the Gush Katif.

After the museum visit, we journeyed to Sderot. We met with a man who works with the media center and had a chance to visit the police station with him to discuss the security precautions taken in the town. 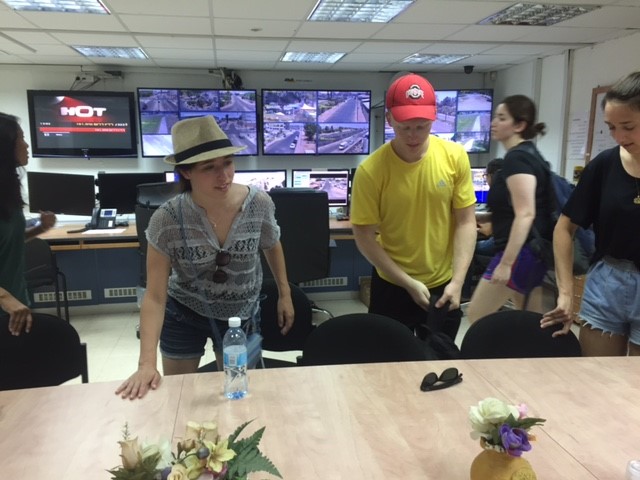 In the past 16 years, 330,000 rockets have been launched from Gaza to this city alone... I guess there’s a reason it’s the bomb shelter capital of the world. 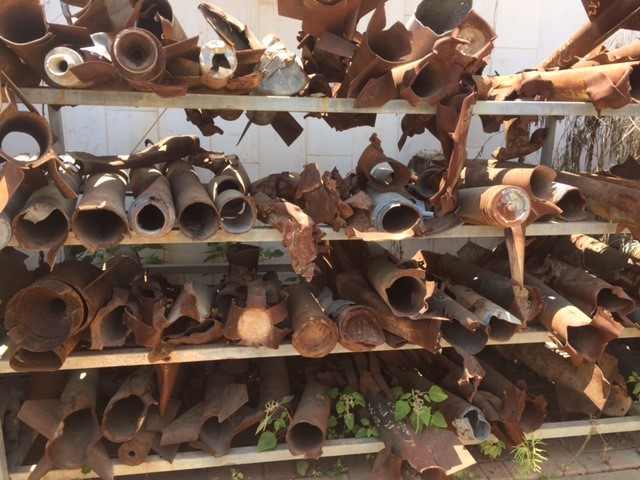 While the town has only suffered 18 casualties in the last 16 years—a testament to defense money spent to ensure these people’s safety—our tour guide encouraged us to understand and acknowledge the extreme psychological stress these rockets put on the people of Sderot, an entirely civilian city. If a picture is worth a thousand words, here is one of an entirely bomb-sheltered playground. 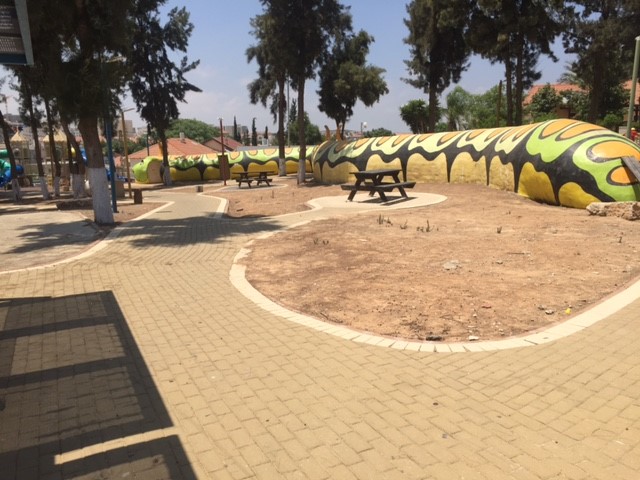 He urged us to remember and carefully consider the people in this town who live this reality as they fight tirelessly to live a normal life. While many outsiders may question their existence in such an unsafe region, our tour guides reassured us that the people here feel protected knowing that there are so many bomb shelters. They also feel pride in the statement they make for the state of Israel by living in Sderot. It is so easy to focus our attention and concern on cities like Jerusalem and Tel Aviv, but I know that I will never forget the people of Sderot.

Our final stop was to meet a woman who worked with an organization called Different Voices. She invited us into her home, which was located less than a couple of kilometers away from the border with Gaza. 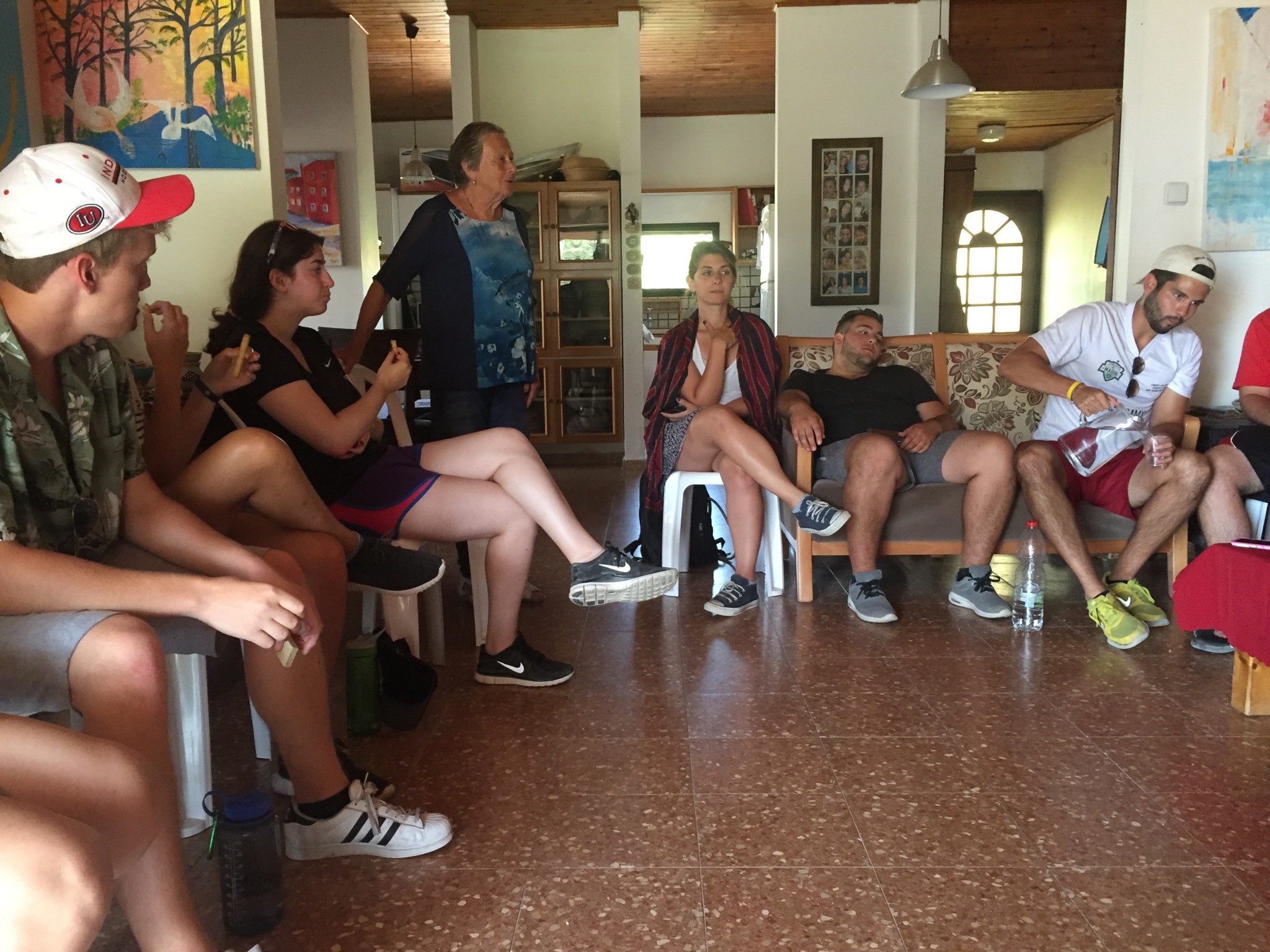 She shared her beliefs about peace between Gaza and Israel through sustained dialogue, and the importance of respecting the civilians in Gaza, who are living under a terrorist regime, which we cannot begin to understand. With her, we traveled to the wall that separates Gaza from Israel and got to see the border with our own eyes. The experience was powerful.

Here is the view of Gaza. 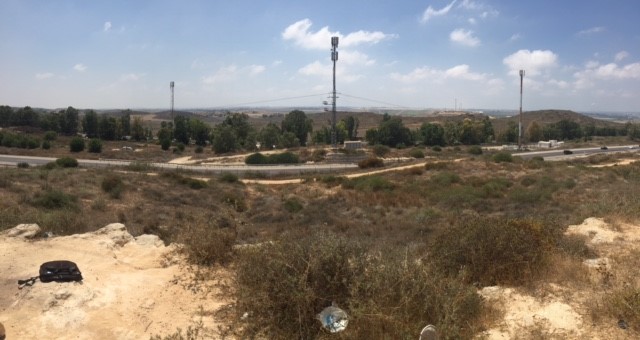 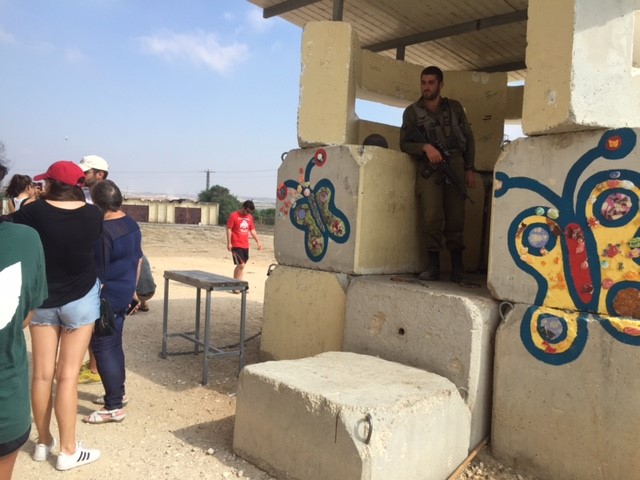 Happily, the next weekend we had the opportunity to stay with host families in Netanya, our sister city. The strong relationship between Netanya and Cincinnati is remarkable to me. Almost all of the hosts had visited Cincinnati before, and we all had fun discussing things like baseball games, Kings Island, and Graeters ice cream, 6,000 miles away from home. My host family members, who have lived in Israel all their lives, had Bengals hats hung up as decorations and drank from cups decorated in the Reds logo. It made me laugh. Now, when they come to visit us in Cincinnati, we can discuss the wonderful beaches in Netanya, Tony’s Ice cream, the good Israeli food, and the new friends we made this weekend. We had a wonderful Shabbat meal, a chance to participate in a Netanya street beach party, and we had the opportunity to live like a local on Shabbat. It was a nice break from the hustle and bustle of Tel Aviv, for sure. 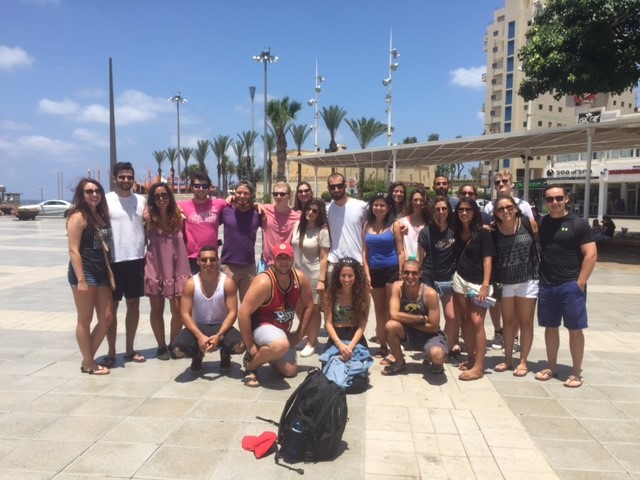 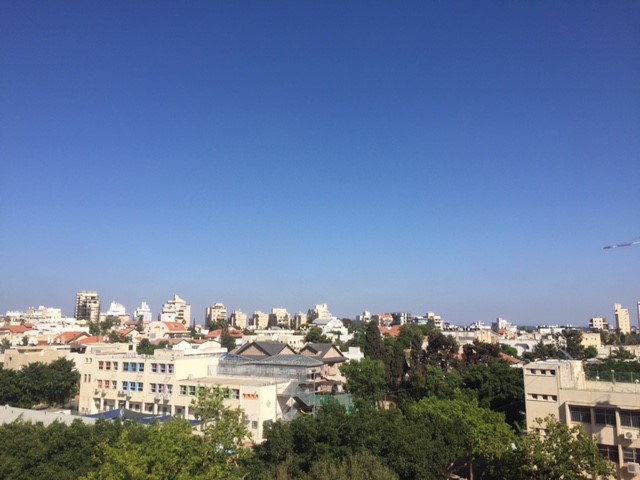 This week, many of us will travel for our breakout session, and some of us have siblings coming to visit. We will all travel to Haifa on Monday. We look forward to another week in the wonderful city of Tel Aviv. 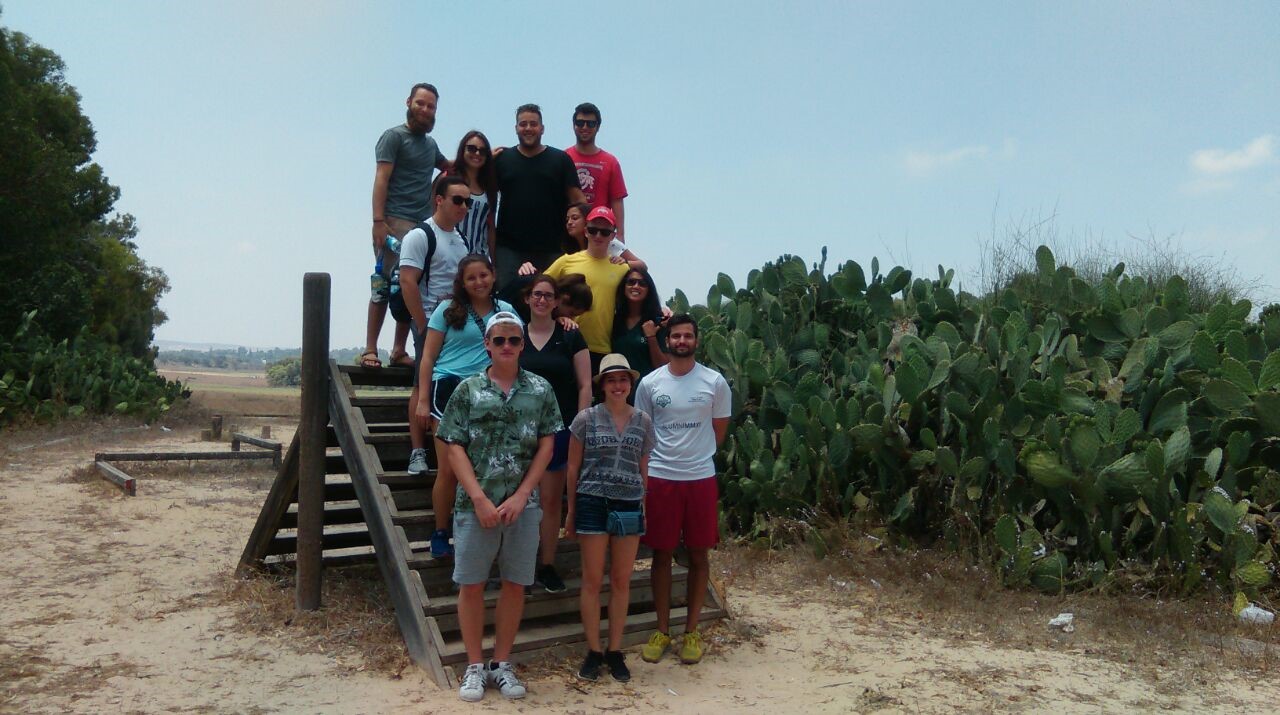 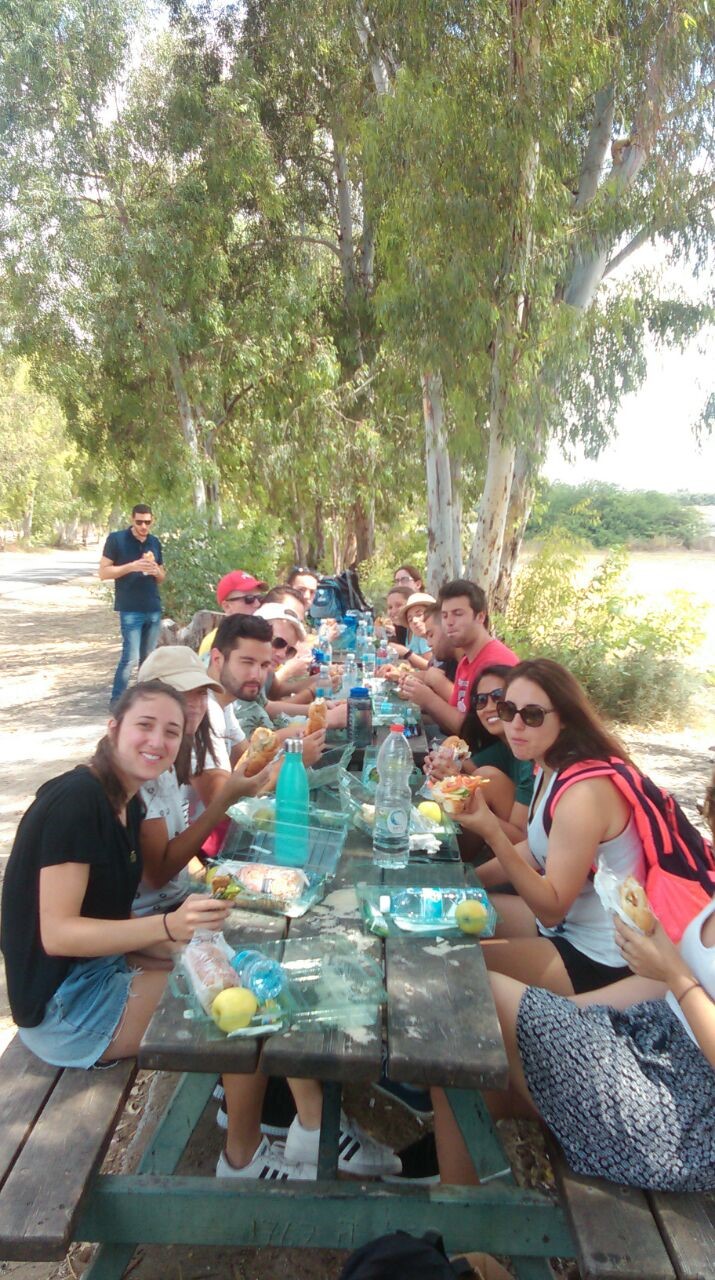 My name is Ben Fershtman, and I’m a Wyoming High alum and a rising junior at Ohio State University. Because I’m an industrial and systems engineering major with an entrepreneurship minor, Tel Aviv happened to be one of the best possible places to search for an internship. During my two months in Israel I will be working in one of the best possible areas given my interests.  As an intern at Snapp, a mobile-first application development platform that aims to revolutionize the rapidly growing mobile market of developing countries, I have the freedom to develop any skills that I deem worthy, all with the guidance of very successful veterans.

As a company, Snapp is less than a year old. The work to be done ranges dramatically and the team works to maintain its heavy growth.  I not only have been able to see exactly how a company starts and grows from the bottom, but I have also been able to contribute to everything from research and data analysis to innovation and strategic implementation of new features. While researching optimal markets for Snapp to target next, I have learned an unimaginable amount about markets in which I may someday aim to launch my own venture. One of the most inspirational and catalytic ideas of Snapp is their humanitarian goal of helping billions of people living in third world countries improve their businesses (and lives) by marketing and selling their products/services online through an app.

This is my third trip to Israel, and so far, it has been just as amazing as the first two. Living on my own and seeing firsthand how society functions in Tel Aviv has been one of the most eye-opening and influential experiences of my life and one that everyone should take advantage of if given the opportunity.  From the food, to the inclusiveness of the community, to the historical presence that can be felt anywhere you travel in Israel, this truly is a one-of-a-kind place in an infinite number of ways.