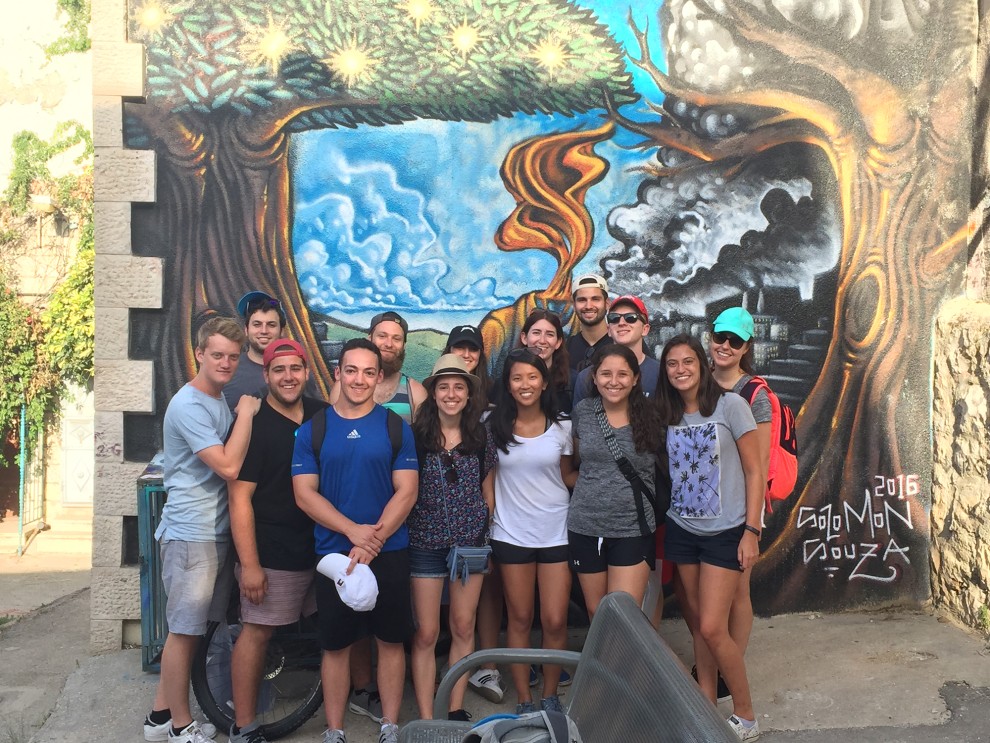 Growing up, I could never really understand why the Jewish day began and ended at sunset. While the biblical explanation for the phenomena is that God first created night and then day, and the historical explanation is that clocks were not around during the time the Torah was written, I could use neither of these explanations to justify to myself why the modernizing Jewish religion still used sunset as the marker of a new day. However, after two weeks spent living here in Tel Aviv, I think I have found my explanation.

To put it simply, the Israeli sunsets are magnificently beautiful and highlight some of the best times spent here this summer.  On Wednesday, we all watched the sun set over Tel Aviv from the Jaffa port as we thought about our goals for the summer and shared an Israeli meal. Many of us have made a habit of walking to the beach at night to watch the sunset on the boardwalk after a day at work. On Friday afternoons, the city of Tel Aviv comes alive and traffic drastically increases as people hurry to get food for Shabbat dinner. However, once sunset falls on Friday evening, the entire city becomes peaceful as people finally begin their day of rest.

Like sunsets, many questions about my Jewish upbringing have already been answered during my time living as a local in Tel Aviv. I have learned the uniting power of simple Hebrew prayers such as the HaMotzi, which all Jewish people, regardless of language, know. I have learned how helpful it is to be able to read Hebrew as I navigate this city.  I hope to continue to rediscover my Jewish upbringing throughout my time here. 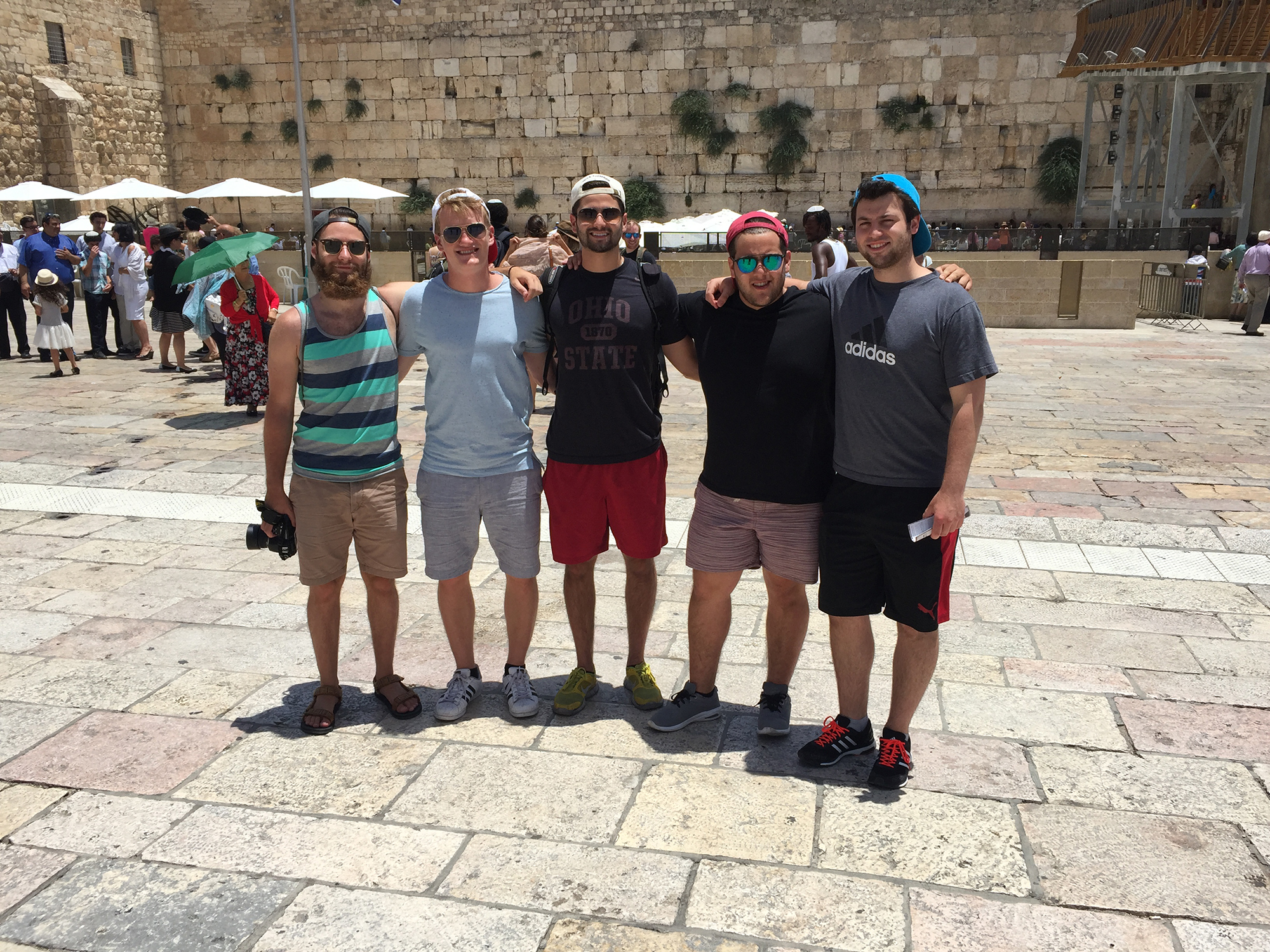 Just yesterday, we took our first day trip to Jerusalem (pictured left are the Onward men at the Western Wall). At the beginning of the day, many of us initially thought of Jerusalem as an ancient, outdated, but historically important city, home to only ultra-orthodox Jews. But as the modern city of Jerusalem began to reveal itself to us, our assumptions were challenged. We first visited Hebrew Union College at Jerusalem and spoke with a student there who is the daughter of the first women ordained as a rabbi in Israel. We discussed the tension between the different sects of Judaism here in Israel and the multifaceted dynamic created by the union of synagogue and state. Through the discussion, it was made apparent that the reform and conservative movements are unmistakably vibrant and growing communities in Israel.

Further challenging our beliefs, we had the pleasure of visiting a grassroots non-profit organization which works to empower Jerusalem’s young adult population to pursue their professional goals in a broad range of industries: the arts, music, photography, tech start-ups, or the civil society sector. In fact, the number of start-up companies in Jerusalem has skyrocketed from 60 just a couple of years ago, to currently over 500 companies. The city was even ranked by Time Magazine as the top tech start-up location in the world. While the Old City of Jerusalem will continue to be preserved, a contemporary and innovative city of Jerusalem is undoubtedly beginning to emerge.

We also spent a bit of time in the Old City, learned some history and tried food from one of the major shuks (markets). We had Georgian cheese bread, herbal Juices from the shuck healer, and hummus and pita, just to name a few. The next few days here will be spent at our internships and this weekend we will be living with host families in Netanya. Below is a testimony from Elina Panteleveya about her internship experience. Look out for a blog next week!

Shalom. My name is Elina Panteleyeva and I am a third year student at the Ohio State University studying Food Engineering. This summer I am interning in the Business Development department at an Israeli start-up called Viewly. Viewly is the home of social network campaigning where people can create and participate in causes by raising funds and awareness. For example, a campaign called ‘#YesWeCat’ was created to help save the bobcats. To participate, you can either donate or post a picture of yourself touching your tongue to your nose with the hashtag ‘#YesWeCat’.

I work with another Onward intern, Josh Greenfield. On the first day of our internship we were introduced to our coworkers, offered coffee, and given a tour of the office. It’s small but nice, there are two rooms and a rooftop. During lunch, everyone eats together on the rooftop! The first day, I was given the task of looking up 30 companies’ Twitter, Facebook, LinkedIn, Instagram, and blogs and noting the frequency and quality of their posts. My next task is to promote the #YesWeCat campaign on Facebook. I will be messaging people and posting in groups to drive participation.

Working at Viewly I'm gaining a lot of start-up experience. I am treated as a full time employee and I definitely feel that my voice is heard and considered. I am also gaining valuable firsthand experience in business development, rather than simply getting coffee for my bosses. Overall, Viewly is a fun environment where I can see myself learning a lot and growing as an individual